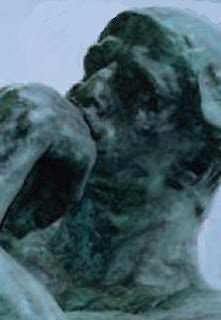 Jerry Coyne has a post I can entirely agree with ... almost!

First of all, Jerry points to a gloriously vicious (and thoroughly funny -- the worst sort of viciousness of all!) disemboweling perpetrated by Gregory A. Petsko, at Genome Biology, upon one George M. Philip, President of the State University of New York at Albany, who recently eliminated the university's departments of French, Italian, Classics, Russian and Theater Arts. You can find more about this shameful episode at Leiter Reports.

I cannot recommend highly enough Professor Petsko's explanation of what a university should be, as opposed to what our public, and even our private, institutions threaten to become in our MBA-driven, corporate-sponsored, ignorance-dependent oligopoly that is sometimes called the United States.

I guess I shouldn't be surprised that you have trouble understanding the importance of maintaining programs in unglamorous or even seemingly 'dead' subjects. From your biography, you don't actually have a PhD or other high degree, and have never really taught or done research at a university. Perhaps my own background will interest you. I started out as a classics major. I'm now Professor of Biochemistry and Chemistry. Of all the courses I took in college and graduate school, the ones that have benefited me the most in my career as a scientist are the courses in classics, art history, sociology, and English literature. These courses didn't just give me a much better appreciation for my own culture; they taught me how to think, to analyze, and to write clearly. None of my sciences courses did any of that . . .

. . . No, I think you were simply trying to balance your budget at the expense of what you believe to be weak, outdated and powerless departments. I think you will find, in time, that you made a Faustian bargain. Faust is the title character in a play by Johann Wolfgang von Goethe. It was written around 1800 but still attracts the largest audiences of any play in Germany whenever it's performed. Faust is the story of a scholar who makes a deal with the devil. The devil promises him anything he wants as long as he lives. In return, the devil will get – well, I'm sure you can guess how these sorts of deals usually go. If only you had a Theater department, which now, of course, you don't, you could ask them to perform the play so you could see what happens. It's awfully relevant to your situation. You see, Goethe believed that it profits a man nothing to give up his soul for the whole world. That's the whole world, President Philip, not just a balanced budget. Although, I guess, to be fair, you haven't given up your soul. Just the soul of your institution.

Professor Petsko makes a number of other points:

~ University students are still, in many respects, children, who should not be allowed to choose their own academic programs but should, instead, be required to complete a core curriculum, including the humanities -- unless, of course, you want to change the title of your institution to "trade school" or "vocational college." The very fact that "comparatively fewer students enrolled in these degree programs" is due to the faculty's abrogation of their duty to broaden the knowledge and love of learning of their students.

~ "Knowledge" cannot be easily classified and "what seems to be archaic today can become vital in the future. ... [T]he real world is pretty fickle about what it wants. The best way for people to be prepared for the inevitable shock of change is to be as broadly educated as possible."

~ "One of the things I've written about is the way genomics is changing the world we live in. Our ability to manipulate the human genome is going to pose some very difficult questions for humanity in the next few decades, including the question of just what it means to be human. That isn't a question for science alone; it's a question that must be answered with input from every sphere of human thought, including - especially including - the humanities and arts. Science unleavened by the human heart and the human spirit is sterile, cold, and self-absorbed."

Jerry goes on to add his own paean to the humanities:

The best teachers are not the ones who instill knowledge in your brain, but those who instill a love of learning, making you autodidactic in their subject for the rest of your life. I don't think I've attained that ability as a professor, but I sure benefited from it in college. And I don't give two hoots for a scientist who knows nothing of music, art, or literature (or food!). They're missing a great swath of the world's wonder.

But then he goes and spoils it all:

Those other disciplines aren't really "ways of knowing," but they're ways of experiencing*, and to die without that panoply of experience, had it been available to you, is to have lived in vain.**

I'm fully aware that Coyne and the other Gnu Atheists want to deny religious experience the same status that they (the rational ones among them, at least) grant to things like music, art, literature, love and those other things we truly "know," at least when we honestly claim the title "human," that nonetheless reside outside of science's grasp.

But they should do the heavy lifting of actually showing the difference between religious experience and the other forms of experiential "knowledge" we have, rather than falling back on trite ... and self-contradictory ... rhetoric about "ways of knowing."
_____________________________________
* Does Jerry even know what the word "empiricism" means?
** [Cough] "What I mean by 'philosophical consistency' is that one's philosophies are consistent. In the case of a scientist, one's scientific philosophy is that you don't accept the existence of things for which there is no evidence."
.

Comments:
I was going to post on this today, but this about covers it. Chris of Mixing Memory made a great remark about this tendency in comments at my place on the Scientism thread:

Blackford has further responded to the (potential) charge of scientism by saying that he gets knowledge of the fictional world of Macbeth from something other than science, which is my favorite reply yet (no word yet on whether he thinks Macbeth can express truth about the world outside of Macbeth).

That's kind of you, even if it does make me sound like a cranky Norse god.

Ah, but how do you know that?

Thank you for sharing the information, the article is very interesting to read and may be useful for everything