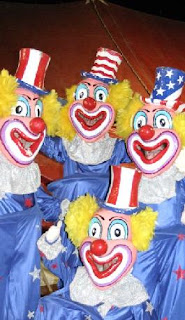 PZ Myearshertz has a post about the quote mining by the Discovery [sic] Institute of a paper, "Impact of temperature on the time required for the establishment of primordial biochemistry, and for the evolution of enzymes" in PNAS. They are, of course, engaging in the time-honored creationist tradition of quoting a scientist setting up a problem and failing to quote the scientist's solution ... just as they quote Darwin about the seeming impossibility of the vertebrate eye evolving but leave out his explanation as to how it could.

To their faint credit, the DI at least hints at the scientists' solution:

Another way to speed up a reaction is to add energy, usually in the form of heat. The authors of this article propose that many of these biological reactions which are prohibitively slow are sped up if they are in a hot environment, such as boiling water. They justify their theory by showing how reaction rates of certain biologically essential reactions, such as OMP decarboxylation or DNA phosphodiester hydrolysis decreases significantly at 100oC compared to 25oC. Furthermore, the authors point out that the slowest uncatalyzed reactions are most sensitive to temperature.

But then comes the really dishonest (and unintentionally funny) part:

It is really speculation, which is interesting, but not compelling without additional explanation for how exactly these catalysts were formed, how the original biological reactions happened, and how the energy added through heat is harnessed and controlled in such a way as to protect the intermediates and products of the reactions from degradation or unhelpful side reactions.

This from the people whose entire argument amounts to "Look at this complex thing! I can't imagine how it could evolve, so it must have been designed because people design things"? Moreover, they resolutely refuse to even hypothesize how or when this "Designer" translated his/her/its design into living organisms, its motives for doing so or why its "designs" so often seem Rube Goldberg-ish.

For people who think fuzzy generalizations and hand-waving count as "science," they have a lot of chutzpah to demand such detail from others, about something we are unlikely ever to know for sure. At best, we will find a workable way that life could have arisen by natural means but probably will never be able to conclude that was the way it happened.

Perhaps even funnier is that they complain that "origin-of-life chemists are [addressing] each and every step in such a piecemeal fashion." But that's how science works! ... by painstakingly sorting through all the possibilities and testing whether they work or not. The DI's failure or refusal to do such work is why they have such a dismal record of publishing in the scientific literature and definitively demonstrates why ID is not science.
.
Link - Posted by John Pieret @ 12:07 AM

Comments:
They seldom fail to entertain (as well as enrage). Thanks for the LOL. ;-)

They truly are pissers ... in all senses of the word.

The DI clearly thinks science gets it wrong because scientists are all afflicted with a disorder - to which IDeologues are happily all immune - called PLD or Pathetic Level of Detail.