Linking to Those Missing the Point 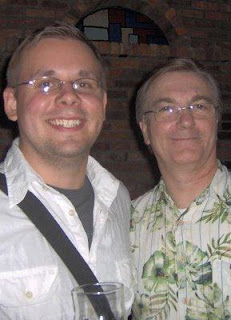 While awaiting my copy of Brian Switek's book, Written in Stone: Evolution, the Fossil Record, and Our Place in Nature (and figuring out how I can get the author to autograph it), there are some things to wile away the time. Besides his blogs at Wired and Smithsonian, there is this nice review of his book by Jennifer Ouellette and, especially, his guest post at Scientific American:

I hate the phrase "missing link". It immediately sends up a red flag in my mind, and is almost always a sure indicator that the person employing it has only a very superficial understanding of the way evolution works. To understand why this is, however, we have to inspect the intellectual baggage that the phrase carries with it.

Long before the explosion of evolutionary ideas during the mid-19th century, scholars of various stripes arranged all of nature according to an intricately graded scale called the Great Chain of Being. (Arthur Lovejoy's book by the same name remains one of the most comprehensive studies of this concept through history.) Rooted in the ruminations of Plato and Aristotle, but most famously adopted by Medieval theologians and Renaissance thinkers, this concept ranked the natural world into a static hierarchy which elucidated the character of the Almighty. ...

This is the scientific context in which the phrase "missing link" became popular, especially in reference to human evolution. ...

Be it straight-up young-Earth creationism or its insidious sibling intelligent design, fundamentalism-fueled views of science and nature abound. ... When the fossils and stratigraphy are laid out so plainly, how can any reasonable person deny that evolution is a reality? Yet, by preferring this antiquated mode of imagery, we may have hamstrung ourselves. Given all that we have gleaned about evolution from the fossil record—especially the major pattern of contingent radiations cut back by extinction before bursting into numerous splendid forms all over again—why not bring this wonderful "tangled bank" imagery to the public?

The real "missing link" is our inability to convey the real science of evolution to the public at large.
.
Link - Posted by John Pieret @ 12:01 AM

Comments:
I've always thought presenting evolution by drawing similarities to economics to be highly effective, because that's something that most people already understand.