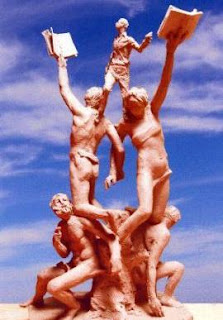 Thony C., at The Renaissance Mathematicus, reminds us that scorn can be a two edged sword.

The Archbishop of Armagh and Primate of All Ireland, James Ussher (1625 – 1656), is unjustifiably cited today by Biblical literalists as support for the notion that the Earth is some 6,000 years old. On the other hand, some supporters of science, sometimes called Gnu Atheists, have reveled in Ussher's Biblical chronology as an object lesson of the stupidity of religion.

As is frequently the case, the facts of history are not so clear cut ... and the Gnu Atheists, as proponents of reason and evidence, are more culpable, in my opinion, for engaging in cardboard history than their opponents.

Ussher, in his historical context, was, as Thony points out (as did Stephen Jay Gould before him), laboring honestly, and with no little intellectual rigor, in a field that attracted such now revered figures as Johannes Kepler, Robert Hooke, Jacob Bernoulli and "the most renowned British chronologist after Ussher, Sir Isaac Newton."

If we heap scorn on Ussher (instead of those who continue to cite him for his outdated ideas), how can we cite Kepler, Hooke, Bernoulli and Newton as the progenitors of science without equal scorn?

Ussher was deeply and seriously wrong, though, given the evidence of his age, not any more wrong than those we deem "giants" upon whose shoulders we now stand.
.
Link - Posted by John Pieret @ 8:54 PM

Comments:
I'm happy to give equal scorn to the others, including Newton, who had a whole boatload of wacky ideas. But even very smart people can go very wrong if they start with the wrong model.

He called a secret meeting of the Irish bishops in his house in November of 1626, the result being the "Judgement of the Arch-Bishops and Bishops of Ireland". This begins:

Aw, isn't that cute. They built themselves a widdle treehouse a made themselves a proclamation-poo just like on the Little Rascals. I'm surprised they don't say girls have the cooties too. Oh wait they probably did...

I was looking for qoutes from qnu atheists in Thonys post, but didn't see any it must be because them gnu atheists said such bad things, that Thony did not care to repeat them.

So I looked up Jerry Coyne - a fire breathing gnu atheist - in conjunction with Ussher - no luck.

Hmm Laurence Moran from Sandwalk is one of those bad gnus, lets se what he says on his blog:
Bishop James Ussher (1581 - 1656) was Archbishop of Armagh and Primate of All Ireland. He calculated that the universe was created on this day in 4004 BC, or more correctly the night before this day.

In addition to astute Biblical scholarship, the calculation required a knowledge of ancient history. Ussher's estimates of ancient dates were pretty good for his time.

We now know that his calculation was flawed because the Bible is completely wrong about creation but it is unfair to make fun of Ussher based on what we learned several centuries later.

Hmm perhaps PZ Myers is good for a soundbite:

almost forgot — in 1658, Archbishop Ussher determined that the world was created precisely at 9am, 23 October, 4004 BC, making today the official creation day, and the earth 6012 years old.

Stop laughing, people. There are some who still seriously believe that: I just got spam from Whirled Nut Daily pushing this very silly book, The Annals of the World, buy James Ussher. They call it a masterpiece. I call it a quaint old oddity.

Well lacking in proper respect for Ussher, but the scorn is mostly directed at worldnutdaily.

in 2007 he mocked the worldnutdaily.

In 2010 he brought the cover page from the annals of the Old Testament:

Alternatively, you could look at the document above and recognize that it's all an awesome load of absurd blatherskite and just toss it all in the rubbish.

I must agree there is not much respect for the esteemed scholarship of Ussher - but mostly the mocking seems to be directed against the biblical account of creation - which is a load of shite in any estimation.

Looking other places I cannot find anything from the arch gnu militant atheist Richard Dawkins on the subject.


My point is - most of the scorn shown on the 23rd of october seems to be directed at the christian myths and on people believing in Usshers chronology, not at Ussher himself.

Soren ignores the comment right before his that proves him wrong and shows the major flaw in his argument. I delved into the comment section of that 2009 PZ post and there's plenty of scorn against Ussher. A handful of bloggers are not the sum total of new atheists.

The accommodationist motto "Never miss a chance to bash new atheists - ever." Why don't you just start every post with I once read a comment on a new atheists blog about so and so and it was wrong - therefore new atheists are all poopyheads. So intellectual, you must be so proud of yourself.

So intellectual, you must be so proud of yourself.

Riiight! Gnu Atheistism should be treated with respect! Any criticism of GAs is so strident!

What was that about "poopyheads"?

I think your point landing a bit far afield of the mark. I don't think I've ever met a Gnu atheist who ridiculed James Ussher. What they ridicule are people who believe that Ussher's timeline is correct.

Could you cite some prominent Gnu Atheists actually ridiculing Ussher, as opposed to ridiculing people today who take his timeline seriously? Or are you going to leave this as a straw man?

Someone somewhere was disrespectful!

At least we know why no one was named in the post. It carries a lot more punch to blame most gnu atheists, than blaming comment number nn on a blog post.

I don't think I've ever met a Gnu atheist who ridiculed James Ussher.

Could you cite some prominent Gnu Atheists actually ridiculing Ussher ...

Wait a minute! Citing those airy-fairy theologians who find compatibility between religion and science is wrong because the religious masses don't hold to such rarified beliefs but I have to limit myself to "prominent" Gnu Atheists?

Now, my being wrong is always an option. And not being clear, even more so. I did not intend to say (and don't think I did) that all Gnu Atheists engage in cardboard history. That would be as silly as saying that all religionists do this or that all "accomodationists" do that. But those who do have, by their own lights, less excuse.

James Ussher is a poopyhead.

As Soren himself pointed out, the original post didn't specify who said it. I did a cursory check and, yes, found people heaping scorn on the man. Funny how Soren couldn't do that - hell, I even used his links.
It's Soren who decided to toady in and name drop. Just a distraction from a nice article about a historic figure I didn't know a lot about.
There's quite a few people out there trying to rewrite history to support their own political agendas. I would think people who say they support good science would also support good historic scholarship.

apparently anyone commenting on pharyngula is a gnu atheist.

I found the article on Ussher interesting, it was just silly to connect it to gnu atheists, when all you got is a comment on a post.

why not just say that some people, or some atheists have that tendency?

"I don't think I've ever met a Gnu atheist who ridiculed James Ussher.

Negative. I've never met these forum posters. If you want me to pull stuff that people said in comments, I can show that every group everywhere has people that say everything.

Please, step down from the high horse.

Also, it would be a decent start to stop taking criticism as if it were personal attacks.

... every group everywhere has people that say everything.

And it was the ones who criticize Ussher based on cardboard history who I was criticizing.

Also, it would be a decent start to stop taking criticism as if it were personal attacks.

Huh? What ever makes you think I took any of this personally?

It certainly is, but that's a problem for you, not me. Personally, I like "exclusivist atheists" better.

But whatever identifier used, seeking to define it using a few popular individuals out of the vocal crowd isn't going to work.
And Thony's generalization of that crowd isn't inaccurate. If individuals want to stand apart from that crowd, good for them.
But that's not what you did here.