The Scientia of Science 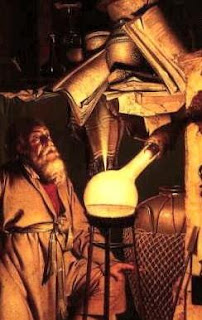 Massimo Pigliucci has a good post on the nature of science, "Why plumbing ain't science," the title of which, Pigliucci explains, "is a reference to Jerry Coyne's occasional remark that there is no substantial difference between plumbing and science because plumbers test hypotheses based on empirical evidence." The gist, I think, of Pigliucci's argument is:

What separates science from other human activities is, I suggest, its extremely more refined methods, its sociological structure, and its historical context. ...

Graduate students learn the art (yes, I'm using the term on purpose ...) of setting up controlled experiments, analyzing massive amounts of data using sophisticated statistical techniques, and writing cogent papers to present their results to the world. None of this is done by plumbers, and for good reasons.

[S]cience is a particular type of social activity, certainly as conceived and practiced today. It has a complex — and necessary — structure of peer review, edited journals, funding agencies, academic positions, laboratories, and so on. Of course science has not always been practiced this way (see my next point about history), but a good argument can be made that it has evolved into a mature discipline precisely when these sort of social structures came to be implemented. ...

The history of science is a fascinating illustration of how a practice that initially truly was barely distinguishable from plumbing eventually became a major branch of philosophy (natural philosophy), and then flourished spectacularly as an independent type of inquiry beginning in the 16th and 17th centuries (Galileo and Newton), culminating in the 19th and 20th centuries (modern physics, biology after Darwin) and beyond. ...

[T]here is of course a sense in which science and philosophy, and indeed math and logic, are connected. ... William Whewell ... coined the term scientist. He got it from the Latin word scientia, which means knowledge in the broadest sense. ... I think it is reasonable to see the totality of third-person knowledge (as opposed to first-person, phenomenological knowledge) along a rough continuum from completely or almost completely abstract (logic and math ...) at one end, to necessarily coupled to empirical evidence (science), passing via an intermediate field where empirical evidence is relevant but most of the work is done via analysis and logic (philosophy).

This is the sense in which I think scientia, but not science sensu stricto, can reject the supernatural (Coyne's and Dawkins' project), or arrive at non arbitrary moral judgments (Harris' project). ... [I]t is in this sense — the continuity and yet individuality of these disciplines within the broader category of scientia — that I argue that plumbing ain't science, as honorable and necessary as that trade is to our everyday lives.

Comments:
Is it a mistake to include the sociological structure in a definition of science? There are professional scientific activities (those that involve peer review, publication etc) but it seems to me that an activity that follows the methodology of science without all the trappings of the sociological structure would still be science. Could a person, isolated on a desert island for the rest of her life, do science?

Could a person, isolated on a desert island for the rest of her life, do science?

No, I don't think so. "Science," as we have come to think of it, is a collective enterprise. At most, an isolated scientist could do the preliminary work of hypothesis building and testing but, without the collective review of and use by the scientific community, it doesn't become part of science. If Mendel had never been "rediscovered" and his work used by the scientific community to make new discoveries, his work would not be part of "science."