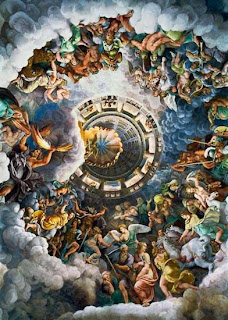 Steve Novella has a good discussion of "anomaly hunting," which bears, I think, on the question of whether science can ever be brought to bear on the existence of god(s):

[A]nomalies are the beginning of discovery and of the generation of new hypotheses. But by themselves they are not evidence for any particular conclusion.

When an anomaly is encountered in science the first step is to make sure it is an actual anomaly. The simplest answer is always that there is an error in measurement and observation, so that has to be ruled out first. When the measurements are all triple-checked and scientists can be as certain as possible that the anomaly is real, then all possible explanations need to be sought within our current scientific theories or paradigms. Only when an exhaustive attempt to explain the apparent anomaly within conventional theories fails, should scientists conclude that they have a genuine anomaly on their hands.

Then scientists can start to generate new hypotheses to explain the anomaly, usually requiring a revision to existing theories. Kuhn characterized this phase as "revolutionary science" in which one paradigm will shift to another in order to resolve the anomalies. He thought such shifts were large and rare. But later philosophers criticized this position as being a false dichotomy – revisions to theories in order to resolve anomalies are actually quite common and range the spectrum from minor tweaks to wholesale replacement with no sharp demarcation at any point.

Further, often revisions to theories involve not replacing old ideas but deepening them – adding layers of complexity that are compatible with the simpler theories but increase their precision and predictive power. Again – a perfect example is the progress from Newtonian mechanics to relativity. Newtonian mechanics still work in most situations, but at high velocities and gravities relativistic effects become important and measurable.

The role of anomalies, therefore, is entirely within the context of discovery and generating new hypotheses. Anomaly hunting refers to the misapplication of anomalies to the testing of hypotheses. The process involves generating a hypothesis then pointing to apparent anomalies as if their existence supports the specific hypothesis.

So, even if you were somehow able to confirm that the supposedly "supernatural" phenomena was real and not hallucinations or some other error in measurement and observation, merely pointing to apparent anomalies under our present understanding does not support the specific hypothesis of god(s) as the cause. Even if the god(s) hypothesis resolves all the anomalies, it would only indicate that it is plausible and interesting. You would need to show the hypothesis' predictive power.

But the very nature of the god(s) hypothesis is such that reliably predicting their action is not possible. At best you would be piling anomalies on anomalies as new unexpected phenomena arose. Or, if you could reliably predict the actions of god(s), that would actually point to the phenomenon being something impersonal and law-like ... in other words, what we call "natural causes."

Sometimes you just can't get there from here.
.

Comments:
I think this represents a deep conceptual divide between believers and unbelievers. To the former (including me at one time) "God did it" seems like a perfectly rational explanation of a phenomenon not otherwise fully understood. But the more I thought about it, the less sense this made -- it's a pseudo-explanation, it answers no question, it's just words masquerading as an answer.

The same with "luck" or "kismet" or any number of other concepts. They're just placeholders for our ignorance.

"Or, if you could reliably predict the actions of god(s), that would actually point to the phenomenon being something impersonal and law-like"

If one could reliably predict the actions of a human, that wouldn't make the human impersonal, just a creature of habit. Why would it be any different if one replaced "human" with "god"?

Now, of course, if someone should hypothesize a particular god ... say, one that can't exist unless it causes a particular phenomena, such as a universe that is only 6,000 years old ... you can test whether the phenomena is real or not and show that the particular hypothesis is not supported. That doesn't, however, bear on whether any god(s) exist. But you can't start from ground zero and say, as Gretchen tried to do, that some anomalous phenomena proves the existence of god(s).

If one could reliably predict the actions of a human, that wouldn't make the human impersonal, just a creature of habit. Why would it be any different if one replaced "human" with "god"?

To expand a bit on my previous: we know humans exist, and have a pretty good ideas of their capabilities and tendencies (in general, and often about specific individuals), so when told eg. "The human called J.J.Ramsey did X" we can investigate whether that is likely to be true (eg. were you anywhere nearby at the time, are you capable of X sort of thing, etc). If we had similar independent evidence for the existence and nature of God, we could do the same for him/her/it/them. What you can't do is to work that logic backwards: cite the phenomenon X as proof of an otherwise-unevidenced agent of conveniently arbitrary abilities and motivations. That move only looks plausible because of the culturally-dominant assumption that God is a person -- of a very special kind, but still a person -- which allows the apologist to smuggle in a boatload of claims about God's nature.

Tangentially, similar arguments apply to von Daniken-esque claims about space aliens: vast castles of supposition about who and what erected on the air of a few anomalous incidents.

"The same with "luck" ... They're just placeholders for our ignorance."

I think you're being a bit hard on the concept of luck. Someone experiences or does not experience a fortunate occurrence. But in the end, it was the result of complex forces beyond their control or immediate understanding.
Now, is it worth investigating those specific forces and completely understanding them, each and every time? Do we have to track the movements of every lottery ball to see how our numbers failed to come up?
Now, it's entirely different if you're trying to influence your luck through superstition, or you use luck as an excuse for your own failure to affect some change in a situation.
But I believe "luck" is still useful as shorthand: After a friend avoids an accident that could as easily occurred in spite of his efforts, I just don't see myself exclaiming: "You were fortunate to experience that particular outcome among the statistically possible ones!"