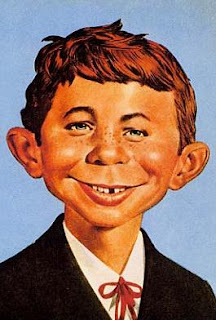 Sometimes people answer their own questions:

I am a conservative, therefore I am... heartless and stupid?

That's what Layne Hansen wants to know in "I'm not ashamed to be a Conservative" in the Idaho State University Bengal.

I won't opine on the question of Hansen's heart or lack thereof but this neatly answers the other question:

The idea that conservatives are evil comes from liberals' flawed logic that if you don't support social welfare programs or recycle, you're evil. This logic holds true when it comes to evolution, religion and climate change. We're told that denying these things is as obtuse as denying the holocaust or the roundness of the Earth or some such nonsense. ...

For some reason, if you believe in God you're an idiot, but let me point out that it's called Darwin's theory of evolution for a reason. Darwin's theories have never been proven with the scientific method. Every claim otherwise has been proven to be a hoax. But these people can no more disprove God than we can prove Him. You can't prove a negative, and that's precisely what they are trying to do.

Of course, belief in God is not the same thing as idiocy. But babbling on about the "theory" of evolution, as if it is somehow less supported than the "theory of gravity," is an excellent marker for a lack of intelligence ... if, for no other reason, Hansen's willingness to make a fool of himself in public by displaying a woeful misunderstanding of the difference between the meaning of "theory" in science, as opposed to what it may mean to a blowhard in the corner bar. The bit about evolution being a "hoax" displays nothing but extreme gullibility and an unwillingness to actually investigate one's own beliefs.

No, science has never "proved" evolution or, for that matter, anything else. But if you think evolution isn't as well established -- in fact, more so -- than gravity, then maybe you are too stupid to be allowed near any cliff edge. Nor is the intent of the science of evolution to disprove God (though many people think it does) but, rather, to explain the way the world works -- which it does so well.

But the truly sad thing is that Hansen seems to think that the facts of the world somehow depend on one's political philosophy. I can easily imagine a world that does not comport with the way I'd like it to be.

Hansen's inability to do so is the definitive answer to his own question.
.
Link - Posted by John Pieret @ 11:45 PM