The Religion of Ignorance 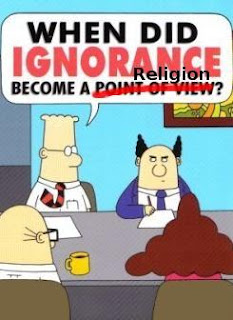 She can't believe her child is being taught science in a public school ... specifically, the science of evolution.

She believes she has the right to keep her child ignorant.

I called Vista and left a message for the teacher or the principal to call me regarding this issue because it is against our Christian beliefs and felt that I as his mother have the right to decide if I want my son to learn about Darwin's theory of Evolution.

Worse, she thinks she can "outsource" the religious education of her child to public employees:

I am under the understanding that schools do not teach or talk about God out of respect for the people that do not believe in God, so why do they teach about Darwin? If they were to teach this as a theory and at the same time teach God's teachings as a Christian theory, then this would give our children the opportunity to make an educated choice but they are not doing this. They are stating that Darwin's theory is fact.

Evolution is a scientific fact. Ms. Godina, of course, has the right to teach her children that religious beliefs trump science, but she has no right to expect government employees to do that job for her, much less teach her children sectarian Christian "theories."

I feel like Vista Middle School, Mrs. Brown, Mr. Yates and Red Bluff School District is taking away my rights to teach my child the religion that I want him to learn.

No, Ms. Godina ... you just have to do the heavy lifting yourself, without resource to other taxpayers' money.
.
Link - Posted by John Pieret @ 9:28 PM

Comments:
This isn't about her son. It's about her, herself and only herself.

Yeah, she can't see why she should have to exert herself.

You know those school boards that are so keen on disclaimers could do a lot worse than have Gould's essay read out to science classes.

Come to think of it, the same could be said for herds of wildebeeste atheists when they gather to paw the ground and snort about Chamberlainite accommodationism, in particular this less-often-quoted passage:

But most of all I am saddened by a trend I am just beginning to discern among my colleagues. I sense that some now wish to mute the healthy debate about theory that has brought new life to evolutionary biology. It provides grist for creationist mills, they say, even if only by distortion. Perhaps we should lie low and rally around the flag of strict Darwinism, at least for the moment—a kind of old-time religion on our part.

But we should borrow another metaphor and recognize that we too have to tread a straight and narrow path, surrounded by roads to perdition. For if we ever begin to suppress our search to understand nature, to quench our own intellectual excitement in a misguided effort to present a united front where it does not and should not exist, then we are truly lost.

As you've pointed out, John, Ms. Godwin is confused about the scope of secular school responsibilities. As you also know, several Christian "ministries" (such as Focus on the Family, Family Research Council, etc.) are raking in the dough by feeding disinformation to the Godwins and their ilk. The sheeple are easily led, especially on this issue.

The Godwins and their kind know that, if their children are properly taught evolutionary theory, then it's very likely that, at some point, they will ponder some very deep, disturbing questions about the religious dogma that's been imposed upon them. This course of events would cause some very uncomfortable rifts in the Godwin household. Since the Godwins probably are not up to the task of defending their crazy beliefs in the face of facts, they need the rest of society to extend their cocoon beyond the boundaries of their home. When the rest of society doesn't follow their game plan, they're threatened. Of course, Ms. Godwin could solve this easily by homeschooling her child.

Oh, right. That's not going to happen because she can't - or doesn't want to - do any heavy lifting.

That's good news for the kid; he may yet have a chance to escape the indoctrination with just a few scars.

Godwin is indeed confused: "I am under the understanding that schools do not teach or talk about God out of respect for the people that do not believe in God..."

It is not "out of respect" for anyone who doesn't share their beliefs, but because the Constitution prohibits the promotion of God. The Constitution does not prohibit the dissemination of facts and scientific knowledge.

She can always join the super crazy Christian home schooling movement, so that she can protect her child(ren) from all those "facts" and "science."