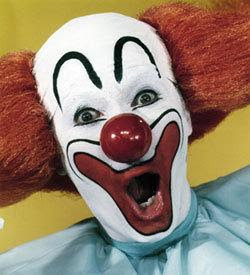 In case you don't know who Brecheen is, he is one of the two Oklahoma state legislators who have introduced anti-evolution bills this year. His version, SB554, can be found here (look under "Senate" and "Introduced"). The other, HB1551, can be found at the same site by searching under "House." That bill appears to be all but identical to a bill introduced in the Oklahoma Senate in 2009).

Brecheen's bill contains the usual type of disclaimer for this sort of anti-science legislation:

This section only protects the teaching of scientific information and specifically does not protect the promotion of any religion, religious doctrine, or religious belief.

So why am I thanking him? Because, as is also usual with this sort of legislation, the promoter can't help but state his real intention out loud for everyone to hear, this time in an Op-Ed piece:

I have introduced legislation requiring every publically [sic] funded Oklahoma school to teach the debate of creation vs. evolution using the known science, even that which conflicts with Darwin's religion.

- Durant Daily Democrat, "Brecheen says the religion of evolution is plagued with falsehoods," [date unspecified but other sources date it to Dec. 24, 2010]

As Victor Hutchison, a retired University of Oklahoma zoology professor who tracks such legislation, said, "It's very slickly written." But if, as a result of the poor election choices of the people of Oklahoma, this bill should be become law, the ensuing lawsuits will be made much easier for the forces of good science education by this blatant statement by the author of the bill that its actual intent is the exact opposite of what it claims. I'm keeping a copy in case Brecheen decides in some courtroom to "pull a Buckinham" and suddenly "forget" he was explicitly promoting creationism.

And they keep claiming that "Darwinism" leads to moral corruption.
.
Link - Posted by John Pieret @ 11:20 AM