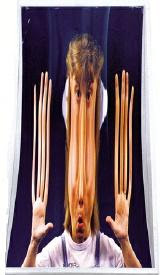 John G. West has whipped out his fun house mirror history of science and is trying to blind the faithful with it. Apparently, it has only been in the last ten years and only at the behest of "New Atheists" that Darwinian evolution has come to the conclusion that evolution, including that of human beings, "is the product of a blind and unguided evolutionary process."

Having set up the "New Atheists" as the bogeymen, he laments the fact that thousands of students at University of Oklahoma "flocked to a lecture by leading new atheist Richard Dawkins," who received cheers and applause. Why does Caiaphas' song from Jesus Christ Superstar keep echoing through my head?

And lest you think atheists are still a pretty despised group in America with relatively insignificant influence compared to Christians, West gives his mirror another powerful twist and the image becomes almost unrecognizable:

The Darwinian view of nature has had a powerful impact on nearly every area of our culture. In public policy, it has encouraged the devaluation of human life. Among Christians, it has led some leading theologians and scientists to argue that God Himself doesn't know how the history of life will turn out. And in science, Darwinian theory has encouraged the censorship of new scientific data as well as discrimination against scientists and students who think nature supplies evidence of intelligent design.

Anyone can see that, before Darwin's book a hundred and fifty years ago, human life was so very much more valued. After all, you could get several thousand dollars for a good slave. And, naturally, it is the business of science to keep theologians in line. As to "discrimination" against scientists who deny science in the name of religion, it's hard to see how they didn't deserve what little they got. But where was there discrimination against students? Has there been a single case where students have been given bad grades because they refused to believe in science, as opposed to being marked on their understanding of the science? Or is it supposed to be "discrimination" to be told something that they would prefer not to believe?

But here is West's funhouse mirror at its craziest:

The good news is that the new atheists are wrong. Far from establishing a blind and purposeless universe, the findings of science increasingly provide powerful evidence that we live in a purpose-driven universe of incredible beauty and design.

But wait a minute ... aren't we always being told that design must be true because "Darwinism" can't produce function (i.e. purpose) piecemeal? In other words, the existence of biological functions demonstrate purpose because purpose is needed for there to be function.

If West keep running in such tight circles, he's likely to disappear up his own ass.

Comments:
And in science, Darwinian theory has encouraged the censorship of new scientific data

Is that why the DI's "journals" are always feeble, pathetic things? Brave new data are being suppressed, they really can't put it out in their own "journals" and website? That sounds like a good reason for no one to send them any money, even if it's not their fault, rather the fault of the ones holding the pliers to their fingernails and toenails.

You'd think they could actually tell us about some "new data" being censored. Or have the Darwinists managed to enter their heads so that they can't, for instance, do research, nor do anything but lob baseless charges at people?

Wow, that must be some great new data. Even so, the more impressive data have to be the ones that give Darwinists absolute and total power over the IDiots, so that although Muslims in dicatorial regimes can often write whatever they please over the internet, nothing intelligent from the IDiots can ever be found flowing from the DI.

And still they're free to tell endless untruths. The oppression caused by Darwinists must be unique in the history of the world, as rancid ancient lies come unimpeded from the DI, while all intelligent commentary is blocked. Which suggests that there must be something incredibly powerful in Darwinism, if perhaps not the actual biology.

... there must be something incredibly powerful in Darwinism ...

aren't we always being told that design must be true because "Darwinism" can't produce function (i.e. purpose) piecemeal? In other words, the existence of biological functions demonstrate purpose because purpose is needed for there to be function.

Even the most stalwart of anti-teleologists will still countenance talk of "functions", so I don't think that West is running in the tight circle you take him to be. Rather, the (implicit) argument is that it is vastly more probable that functions of _______ type are the result of purpose than they are of accumulations of contingencies.

The problem for design theory is that they haven't yet been able to specify the relevant probability and the exact nature of the _____ type of function in a non-question-begging way, so that "functions of _____ kind" (irreducible complexity or whatever) just get cashed out as "extremely improbable." So the design argument tells us only that very unlikely events are very unlikely. That's a somewhat different error than saying that they identity functions with purposes are the outset.

I don't thinks so. The reason they can't "specify the relevant probability and the exact nature of the _____ type of function in a non-question-begging way" is because they are identifying function with purpose in the first place. Of course, they don't say that but that's what they ar doing.

A bit more on this: Josh Rosenau has a post on the difference between "purely natural and materialistic” and “unguided and purposeless," the denial of such a distinction is something that both IDers and Gus revel in. From the IDers side, being able to describe life in "purely natural and materialistic” terms is the same as saying it is “unguided and purposeless." The corollary of that is they have to imply, if not say outright, that all function must be guided and purposeful. That they then use "function" (i.e. purpose) as a central part of their argument for design makes it tightly circular.

I'll gladly concede that you've been following the IDers more closely than I have. So if you think that their central move is to identify function with purpose, I'll accept that. And thanks for the link to Rosenau; I'll take a look at it!

Creationists use "unguided" the same way they use "random". Evolution isn't random or unguided. But they will use those words to trick people, or even to trick themselves. In other words they aren't always speaking in metaphysical terms when they say "unguided". Sometimes they're just outright being deceptive or spiteful, basking in all the equivocational glory of the two senses of the word "unguided".

Hello there.
I know this is kind of off topic but I was wondering
if you knew where I could find a captcha plugin for my comment form?
I'm using the same blog platform as yours and I'm having trouble
finding one? Thanks a lot!

﻿This design is incredible! You most certainly know how to keep a
reader amused. Between your sense of humor and your clips,
I was very nearly moved to start my own blog (well, almost.

﻿I'm not that much of a internet reader to be honest but your site is great, thanks!