The Burdens of Office 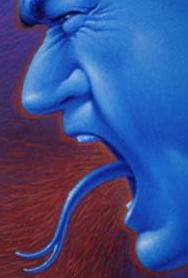 Ooh! I just watched Bill O'Reilly "interview" President Obama in the run-up to the Super Bowl.

Actually, it was O'Reilly doing his shtick ... rapid fire "questions" that are really political statements while interrupting the answers with further political statements. While "respect" for presidents and other politicians can be overdone, constantly interrupting the president mid-sentence is nothing but O'Reilly's rampant egotism ... thinking he is more important than the President of the United States.

I'm not into ESP but I think I could read the President's mind when O'Reilly asked "What's the worst part of the job?"

Comments:
Is there some sort of sporting event happening this evening?

The frightening thing is that, for his core audience, O'Reilly is more important than the President. Of course, that audience also thinks that Palin or Bachman would make good presidents.

We're getting closer to Mencken's prediction:

As democracy is perfected, the office represents, more and more closely, the inner soul of the people. We move toward a lofty ideal. On some great and glorious day the plain folks of the land will reach their heart’s desire at last, and the White House will be adorned by a downright moron.

Is there some sort of sporting event happening this evening?

I've heard so, but why it should be connected with Bill O'Reilly eludes me.

Is there some sort of sporting event happening this evening?

No there was a highly hyped entertainment show as a vehicle for high powered commercial advertising with occasional short breaks filled out with some sort of sporting activity.