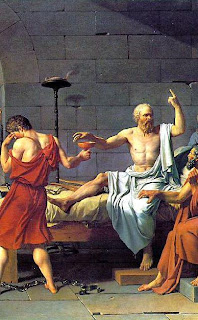 PZ Megahertz has a (mostly) good rant on some inane arguments that atheists commonly float.

He goes wrong here, however:

The "I believe in no gods/I lack belief in gods" debate. I have heard this so often, the hair-splitting grammatical distinctions some atheists think so seriously important in defining themselves. All you're doing is defining yourselves as anal retentive freaks, people! Get over it. Either way, you're an atheist — and that goes for the over-philosophized fussbudgets who insist that they're agnostics, not atheists, because they aren't 100% positive there aren't any gods, only 99 44/100ths positive. Atheism is such a general club, and it's so easy to fall into the definition, that it's silly to sit around arguing about how close to the fence you're sitting.

First of all, PZ's post, whether he realizes it or not, is one long exercise in analyzing arguments and trying to drill down to their actual meaning and utility ... in other words, philosophizing. Whether he is 'over-philosophizing' is a matter of perspective. Certainly, denying the utility of philosophy while engaged in it yourself is the worst sort of anti-intellectualism.

And, of course, his claim that agnostics believe what they do only because they "aren't 100% positive there aren't any gods" is every bit as much an attempt to define agnostics by (his own) dictionary as the "Dictionary Atheists" he deplores, who are trying to ignore "the practice of atheism."

I am an "agnostic" because I don't believe that there is any human ability -- science, reason or any other -- that can address the question. I don't practice any religion because I see no evidence that it makes any difference to what goes on in the universe and, furthermore, I can't see how anything that I would consider a god would think it would matter whether or not I did. But I really, really, don't think I can know whether or not god exists. It is not that I demand 100% certainty before I'd consider atheism. As PZ says:

If PZ thinks that my failure to practice religion or my denying the possibility of knowledge about god is the same as atheism, how is that different than what the "Dictionary Atheists" do? If not, he'll have to do better to show that we agnostics are the same as atheists.
.
Link - Posted by John Pieret @ 12:36 AM

Comments:
I don't know if PZ had all agnostics in mind, but I do sometimes run across people who use the "absolute certainty" definition to declare themselves such. Which *is* crap: little or no knowledge is absolutely certain in that sense, some doubt attaches to any claim -- but we don't generally hedge our bets on everything.

I don't know if PZ had all agnostics in mind ...

Yes, I thought of that. There are, indeed, people who use the term to mean "I'm not sure," or even "I don't like to go to church." But PZ specified "over-philosophized" agnostics, which implies people who think about the term more than that.

Only in the sense that I am practically a woman ... in that I share the traits of women who are over 60 years of age and unable to conceive a child.

Well, butter my butt and call me a biscuit, I mean, atheist! Sure, I'm about as churchy and religious as it gets, but I'm not 100% sure God exists either. (That's why I call it 'having faith' instead of 'being certain.')

O John Pieret, one of the few bloggers that makes this overworked middle-aged mother's feedreader . . . this reminds me of the problem of how many hairs a man has to be without before we call him bald.

At what percentages of certainty/uncertainty do we declare someone crossing over from theism to the Other Side?

Some days I'm pretty sure God doesn't exist and I'm just talkin' to myself. Most days I lean toward God existing, but it's never 100% either way, because that's just the kind of fence-sitter I am.

Am I an atheist, or not?

I call myself agnostic because I agree with Huxley's original definition and because, like John, I don't believe there is any way in which we can know whether or not there is a God and hold that this is a non-trivial distinction.

However, since I assume that for all practical purposes there is no God, so I suppose I am what Dawkins calls a "de facto atheist" to that extent.

I would say that for an atheist or a "de facto atheist," the only reason for not stating "there is no God" is for the simple technicality that you cannot prove a negative.

An agnostic, on the other hand, actually has doubts about the negative.

If I'm ever arrested in England, I do hope I'm able to prove a negative.

I'm 100% sure there is no scientific proof of god. I'm also happy to listen to and associate with reasonable people on either side.

After all, one person's god is another person's multiverse. Who am I to judge their beliefs when they've both proven to support good science education?

I think I'm more of a John S. Wilkins agnostic, though I call myself an atheist. Wilkins says that he's an atheist with regard to the Abrahamic god, and so am I. But he reckons that you have to have considered every god claim (indexing claims) before you can call yourself an atheist. Which seems a bit hard.
I may have misunderstood that albino ape-man, so apologies if I got it wrong.

I love PZ's work most of the time, but the scorn directed at philosophy is a bit silly given he's philosophimacating.

Oops, I should have mentioned that I'm 100% sure there is no way to disprove god either.

You almost make me think the effort is worth it.

I'm guessing that you are you and don't need to worry all that much about categories loudmouths like me and PZ may argue over.

But I'm glad you enjoy it.

I think I'm more of a John S. Wilkins agnostic, though I call myself an atheist. Wilkins says that he's an atheist with regard to the Abrahamic god, and so am I. But he reckons that you have to have considered every god claim (indexing claims) before you can call yourself an atheist. Which seems a bit hard.

My understanding is that Wilko describes himself as an "apathetic agnostic" (don't know, don't care). What you're talking about sounds closer to ignosticism which, according to the ever-reliable Wikipedia, is

Sorry catshark, I was going for the pun by taking "practically" literally. (BTW, I am pretty sure for all practical purposes, you are not a women.)

At any rate, my approach is to treat atheism and agnosticism as two independent things rather than two point on one scale. One can be strongly religious or theistic and also be strongly agnostic, just acknowledging that their belief is strong in spite of any lack of evidence.

The same is true for atheists. Their belief in the lack of gods can be strong but also strongly believe that the absence of evidence is not evidence of absence.

I was going for the pun by taking "practically" literally.

I knew it was tongue-in-cheek. But the point, I think, still stands. Just because I share some characteristics with atheists doesn't mean I am one.

I had thought that I was agnostic, until PZ assured me that I was an atheist. But when I read what PZ had to say about defining atheism, I realized that I am not an atheist, either.

I guess I will stick with being non-religious.

Hi everyone! I’m new here, but I’m glad to have found such a cool forum. Thank you for sharing helpful advice here.