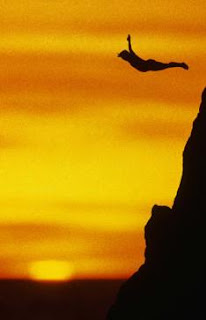 The Giles County (Virginia) School Board has, for now, pulled back from the brink. But they may just be circling back around for a better run up to the edge of the cliff.

In a special meeting of the board on February 22, 2011, it reversed (yet again!) it decision on the official displays of the 10 Commandments in its schools.

But things get murky from there.

The board is being advised by Liberty Counsel, the legal arm of the late Jerry Fallwell's Moral Majority, led by Matt Staver:

Liberty Counsel, a Florida-based religious freedom group, had advised Superintendent Terry Arbogast that the school district "would lose" if hit with a threatened lawsuit by the Freedom From Religion Foundation and the ACLU, according to minutes released Wednesday of a Tuesday special school board meeting. ...

Liberty Counsel said it would not provide free legal representation to the school district if the posters stayed up and drew a lawsuit, the minutes said.

The minutes were revised less than two hours later to remove the point about losing in court. Board secretary Amanda Tickle said in a later interview that the original minutes needed rewording but were accurate.

"We made it clear that we would be willing to defend the school whether they kept the current display or altered it," he said. "There are pros and cons to both strategies. We never said, 'Here's the better chance.'"

So, what's going on? Here's this lawyer's educated guess:

Staver was just handed the latest in his long string of defeats, when the Supreme Court let stand the Sixth Circuit's decision that displays of the 10 Commandments by two Kentucky counties, which had previously been found to have violated the Constitution, were still in violation even after attempts to recast the displays as "historical."

The appeals court said it found little evidence that the counties' intent in hosting the Ten Commandments displays had changed from an impermissible religious motive to a permissible secular purpose.

"It is clear that these resolutions, like the previous statements of purpose, were adopted only as a litigating position," the court said.

"Defendants have continuously sought to defend their actions and accomplish what they initially set out to do," the appeals court said.

The majority judges said the officials' overall purpose was still the unconstitutional use of government property and resources to spread a religious message.

Basically, as soon as the board minutes went up, there were frantic calls from Liberty Counsel saying "ixnay on the ruthtay." If you say that you know you'd lose in court and then put the Commandments back up again as part of some allegedly "historical" display, you're admitting that your intent is just a litigation ploy.

Once again, a fine example of the morals that religion instills in people.

... residents are preparing to buy billboards and paint tractor-trailers with the words, "We support the Ten Commandments in our schools.

Which, of course, is their absolute right under that same First Amendment that they just can't quite get the hang of ... as long as they don't try to use taxpayer money for those billboards and trucks.

Scores of students have placed the commandments on their lockers at Giles High School, according to Buckland, who saw them on a recent visit.

Which is also their right ... though you do have to wonder what the reaction would be if some enterprising student was to start to display some of the juicer bits of the Song of Solomon on his or her locker.
.

I'm not so sure that it's Staver's confusion over the law ... though that's certainly a distinct possibility ... as much as he's making a plea to the court to let legislators endorse Christianity because ... well ... just because.

For example, would they want to post a series Papal encyclicals?

Or how about a little something from Methodism such as Wesley's Covenant Prayer?

Or how about something giving the beliefs of The Religious Society of Friends, except that, according to Wikipedia they "completely reject all forms of religious symbolism and outward sacraments"? They were certainly around at the time the country was founded and we have evidence of how well-received they were by the more Puritanical elements of the time.

Or how about some choice passages from Martin Luther's On the Jews and Their Lies?

But perhaps a more apposite passage from the Bible might be Matthew 6:5-6:

6:5 And when thou prayest, thou shalt not be as the hypocrites are: for they love to pray standing in the synagogues and in the corners of the streets, that they may be seen of men. Verily I say unto you, They have their reward.

That would never fly. The trouble with that passage is that it is something Jesus said. And that sort of 'Christian' only likes the "Christ" part of Jesus Christ. They're glad he died to take away their sins, but they wish that he'd been quicker about it and had just STFU in the meantime because he was way too soft on crime, viewed foreigners as neighbours we're supposed to love and was positively bolshie with that guff about giving your money to the poor (and not even 'the deserving poor'!).

I noticed quite some time ago that those 'Christians' seldom quote Jesus but only the Old Testament and some of the epistles and they fetishize Revelations.

Cheers for the quality content in your write up on Blogger: Thoughts in a Haystack.
.
Ok bye

My spouse and I absolutely love your blog and find
nearly all of your postings to be well researched.
Do you offer opportunities for guest writers to submit blog posts for your website?
I would like the opportunity to write on subjects related to the content that
you publish on your site.

﻿Wow! I'm genuinely enjoying the design of your website. Are you using a custom made theme or is this readily available to all users? If you really don't want to say the
name of it out in the public, please contact
me. I'd absolutely love to get my hands on this template! Thanks.