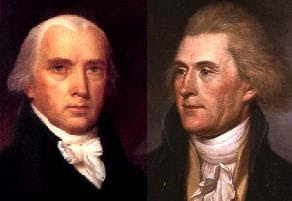 That's a fair description of Bryan Fischer, Director of Issues Analysis for the American Family Association.

His latest example (out of many, as documented by Joseph L. Conn at The Wall of Separation) is his claim that the First Amendment's guarantee of religious freedom applies only to Christians. Ed Brayton at Dispatches From the Culture Wars shows that Fischer can't even read.

Fischer claims that Jefferson was shocked to find out during the Barbary wars "that Islam requires Muslims to rob, kill and pillage infidel Christians wherever they find them." But Jefferson also wrote the Virginia Act For Establishing Religious Freedom, passed shortly before the Bill of Rights and certainly an inspiration for the freedom of religion clause of the First Amendment. In his autobiography, written long after the Barbary wars, Jefferson remembered with pride:

Where the preamble declares that coercion is a departure from the plan of the holy author of our religion, an amendment was proposed, by inserting the word "Jesus Christ," so that it should read "a departure from the plan of Jesus Christ, the holy author of our religion." The insertion was rejected by a great majority, in proof that they meant to comprehend, within the mantle of it's protection, the Jew and the Gentile, the Christian and Mahometan, the Hindoo, and infidel of every denomination.

James Madison wrote his Memorial and Remonstrance Against Religious Assessments in opposition to a bill in the General Assembly of Virginia that would have levied a general assessment for the support of teachers of religions. That bill was tabled and a few months later the General Assembly passed Jefferson's religious freedom bill. Madison wrote in the Memorial and Remonstrance:

Who does not see that the same authority which can establish Christianity, in exclusion of all other Religions, may establish with the same ease any particular sect of Christians, in exclusion of all other Sects? that the same authority which can force a citizen to contribute three pence only of his property for the support of any one establishment, may force him to conform to any other establishment in all cases whatsoever?

Only an idiot could think that the man who wrote those words could turn around and a few years later usher in a Bill of Rights, without a word of protest, that gave freedom of religion only to Christians.

Fischer is that idiot. But he spreads his ignorance to others and that makes him dangerous.
.

Comments:
Without doing any research I would have expected Fischer's view to be correct. To the best of my knowledge, Canada's founding fathers, or at least, John A McDonald did feel that way; That is, all Christians should have freedom of religion. Just as the bar in the Blues Brothers played "Both kinds; country and western", Canada's founders were proud to accept both kinds of religious groups - Catholics and Protestants.

------------
As a Canadian, I have US envy and enjoy seeing, once in a while, your nation's flaws. Still, the broadmindedness of your founders is indeed admirable.
--
I received an "open ID error" message -I am using the same pseudonym but with a link to a different blog - same guy though.

There were, no doubt, many Americans who felt the way Fischer does and a number of states did maintain "established" curches (in one form or another) for many years after the Bill of Rights was ratified (since the Bill of Rights was deemed to apply only to the Federal government until the 14th Amendment was enacted, after our Civil War).

But the people who are considered the Founders were strongly in favor of keeping the government out of the business of religious conscience.

These people are happy to talk expansively about the US being a Christian nation - even just a religious nation - but that's just until they have the chance to put their ideas into practice. Then we'll find out that what they actually mean by Christian is their own particular flavor.

Anyone who imagines that any of the various Christian denominations would be content to see one of the others established as the state church is living in cloud-cuckoo land. When Southern Baptists talk about America being a Christian nation, they mean Southern Baptist Christian not Roman Catholic or Episcopalian or Mormon.

It was the same back in the Founding Fathers' day. Look at the way the Quakers were treated by the Puritans in New England. I'm betting the Founders were well aware of the potential for religious conflict in a state church and they didn't want a New World version of the Thirty Years War breaking out there.

going on memory here, but the irony is that it was evangelical activists who also lobbied for separation of church and state -- one of them I believe worked with Jefferson -- because they did not fare so well under colonial religious laws such as Virginia's which did not favor heretics like Baptists.

I've heard the argument about the Barbary Pirates being our first encounter with "jihad." Aside from the obvious problems of imposing a 21st century dynamic on the early 1800's, the main problem they the argument has is the motive of the pirates. And the barbary pirates, by being pirates, probably didn't have very different motives from the pirates we're more familiar with, namely profit.

But they probably didn't say ARRRR as much.