Lying Down With God 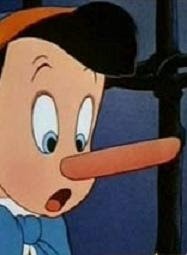 When a Discovery Institute drone starts off a screed:

In the history of modern propaganda with its technique of the Big Lie, it's hard to think of a brazen untruth more successful in shaping opinion than the one that equates intelligent design with Christian fundamentalist creationism ...

... you know what will follow will be filled with Big Lies.

And when the screed-purveyor is David Klinghoffer, you can be sure it will be confused.

The next Big Lie comes in the very next sentence:

Almost as influential is the related lie that there is no serious scientific controversy over Darwinism, that main support pillar of contemporary materialist or naturalist doctrine.

Of course, there is no serious scientific controversy about the theory of evolution, which is not the same thing as "Darwinism" as the DI defines it ... materialism or naturalism.

And, being a Klinghoffer screed, it immediately contradicts itself by attacking naturalism, a philosophical concept, instead of touting any scientific evidence for ID, which, of course, doesn't exist ... just the same ol' anti-evolution arguments, such as Michael Behe's Edge of Evolution, linked to the "contrived dualism" that Judge Jones rightly skewered in the Kitzmiller decision. The cdesign proponentsists have tried to scrub ID of its obvious theological content but you have to be pretty gullible to buy that.

That, naturally, is the Big Lie in the first sentence. ID certainly was born in the Christian fundamentalism of its founders, such as Phillip Johnson and William Dembski (who is described as having "moved on to other academic posts," without mentioning that his present academic post is a Southern Baptist seminary, where he was recently shown the instruments of torture and forced to recant).

So, while IDers try to maintain a "big tent," it is clear that the real motive is conservative theological creationism, as shown in this from Jay Richards:

I argue in the introduction to the just-released book God and Evolution that theism and Neo-Darwinian evolution, under standard definitions, are incompatible creeds. Insofar as a view is theistic, I argue, it will modify Neo-Darwinism. And insofar as it is Neo-Darwinian, it will modify theism. So it's no surprise that attempts to reconcile the two invariably result in heterodoxy (whether theological or scientific), fuzzy and ambiguous language, distinctions without a difference, or all of the above.

Not that Klinghoffer is capable of hiding this fact:

You could put it this way: The universe is haunted.

Haunted not by ghosts but by a source of ancient, unseen, immaterial agency.

Riiight! An ancient, immaterial being. That isn't a theological position ... nosiree Bob!
.

Comments:
Haunted not by ghosts but by a source of ancient, unseen, immaterial agency.
(emphasis added)

And here he shows his lack of even understanding what ID is officially supposed to be. Given that ID says nothing about the designer, he can't say that "it" is ancient any more than he can say that "it" created everything two seconds ago. Dumbass.

I liked how mere propagandist Klinghoffer started off a recent screed--in a wholly contradictory manner:

I've never quite understood what serious purpose political bumper stickers are intended to serve. Do drivers really think they're influencing anyone? You put "VOTE FOR SMITH" on your bumper and then the guy in the car behind you who was all set to vote for Jones slaps his forehead and says "Oh, it says 'VOTE FOR SMITH.' That sounds pretty emphatic. I guess poor old Jones will have to do without my support this year!"

Only among Darwinists do bumper-sticker type slogans really seem to aid in generating a climate of opinion. I don't mean slogans literally that appear on actual automobile bumpers but a variety of old chestnuts and hoary bugaboos that, however easily falsified, propagate throughout the writings of Darwinists on the Internet and elsewhere. Endlessly repeated and believed, they serve as a pervasively influential substitute for thought.

See, slogans don't work. And, they work so very well that Darwinism relies upon those alone to support itself against the devastating case that ID makes (OK, flimsy unscientific garbage specifically marketed to theists).

The guy seems to be able only to attack, usually via projection. The man who can't even make the idiotic case that Behe and Meyer can for ID, blithers on and on about how ID is right and Darwinism is the Big Lie, all the while telling us that ID isn't religious and that it's the only proper science because it's religious to the hilt.

I'd like to say, ignore someone that incapable of coherent thought. The problem is, he both promotes and appeals to precisely the unordered thought, vicious attacks, and a heightened us-vs.-them mentality that spurns everything rational, measured, and evidence-based. That in his and others' hands is partly why such a bankrupt and exposed (Wedge Document) fraud doesn't disappear along with any real illusion that it could be at all scientific.

Not that "naturalism," which really exists more to create conceptual space for religion than to guide science, doesn't present a conveniently vapid philosophical target for these bozos.

The argument for intelligent design goes back to antiquity -- versions of it can be found in Anaxagoras, Plato (though not Aristotle), and the Stoics. That argument yields a theological metaphysics, but (obviously) not a Judeo-Christian theology.

That's quite different from contemporary support for the intelligent design movement, which is mostly (though not always) "nudge, nudge, wink, wink" creationism, where the designer is identified with the Creator.