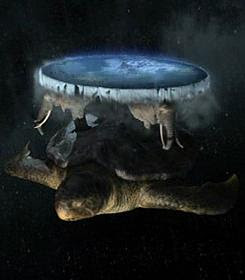 The silverbacked Oznian [starting off with the apocryphal "it's turtles all the way down" story]:

Recently, an article claimed that religion is becoming extinct in some countries. This is because the trends to date have been the decline of religious adherence there. But trends in social structure are not like the movements of continents or large weights on ice. They have no momentum. They change because conditions are such that individuals may choose not to put resources into religion, or because religion no longer serves a particular need, or simply because it hasn't yet adapted to new technologies and economic conditions.

All religions have a social ecology to which they must adapt. And they do adapt, just like a species of plant or animal that must adapt to an invader or new disease. Some fail to do this, of course, and they become extinct. We do not hear very much about the Moravian Brethren or the Shakers these days. Others find a way to circumvent or even exploit the new conditions. Hence televangelists. But if we think that because we in these nine enlightened countries happen to have the conditions under which around 20% of people lack religious beliefs, that no more means that religion will fail ultimately than the fact some people have a resistance to AIDS means AIDS will eventually disappear. And no amount of Turtle Anecdotes will make it so.