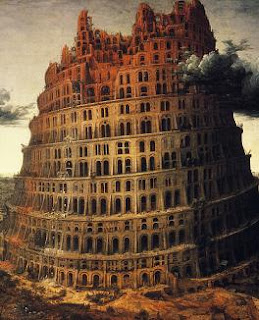 Rabbi Adam Jacobs is going to solve the problems of the science of evolution using the Jewish mystical tradition of Kabbalah ... in the pages of the Huffington Poo no less.

I'll wait until you finish laughing.

But what problem does evolution have?

Well, a philosopher misunderstands it. Jacobs, not understanding evolution himself, cannot realize that the late philosopher, David Stove, didn't understand it either. You can read Stove's book on line but I don't think you'll need to get very far to see what I mean. This is from the opening of the first essay in the book:

If Darwin's theory of evolution were true, there would be in every species a constant and ruthless competition to survive: a competition in which only a few in any generation can be winners. But it is perfectly obvious that human life is not like that, however it may be with other species.

Of course, Jacobs, and Stove before him, instead of wondering whether they understand the science, just assume that hundreds of thousand of scientists are too stupid to see such an obvious "objection" to their work.

In fact, this is just the confusion of the science with the metaphor of "survival of the fittest" originally coined by Herbert Spencer and, unfortunately, adopted by Darwin at the urging of Alfred Russell Wallace (who thought the term "natural selection" too metaphorical) but which would wind up causing no end of mischief.

In fact, natural selection does not rely on a "ruthless competition to survive," though that can be part of it. It relies on the existence of traits that give their possessors "differential reproductive success." And one trait that can do that is cooperation in social species, such as humans, our close cousins and our common ancestors.

Jacobs actually goes downhill from there, quote mining Niles Eldredge and Stephen Jay Gould ... inevitably concerning "Punctuated Equilibria." Then he quote mines another philosopher, Karl Popper, based on the recommendation of Melanie Phillips, of all people ... further proving his inability to judge the reliability of sources.

So, what does Kabbalah have to do with evolution? I frankly don't have a clue ... which I think puts me on a par with Jacobs. It has something to do with string theory, the book "Flatland" and Adam who originally "extended from one end of the universe to the other" and "represented the totality of all that was - a unified whole that contained all the elements of life as we know it."

[J]ust like the warping of perspective that occurs when a globe is flattened into a map or of the limited capability of perception of the Flatlanders when confronted with three dimensions, Ms. Schneider suggests that our ability to peer into our distant past is equally compromised. We see that there is a relationship between species but can't piece together precisely what it is. Perhaps this is the result of the 10 dimensional implosion of the unified whole that was our world. We can no more grasp 10 dimensional reality than the Flatlanders can 3. As she says "our earthbound minds cannot grasp its unity. Instead we observe a series of related but disconnected slices...where each appears as an entity unto itself. Still, there is no evidence that they evolve one from the other. Rather, they are simply, observably present."

That is better described as Babelahdeedah.
.
Link - Posted by John Pieret @ 12:01 AM

Comments:
I wonder if it's possible to trace the exact Disinformation Institute document these poor rabbis are cribbing from by the particular quote mines and buzzwords they use.

That would be an interesting project. A quick Google doesn't show any obvious suspects but it could be a book or a couple of articles somewhere.

Shorter version: "If you did not see it unfold before your eyes, you cannot draw any conclusions about what happened, regardless of how many independent lines of evidence there may be."

Hello There,
I really like your site! Impressive work on the page design.

Feel free to surf to my web page: Desktop Gadgets

﻿Hi.
I just wanted to ask if you ever have any trouble with
hackers? My last blog (wordpress) was hacked and I ended up losing many months of hard work
due to no data backup. Do you have any solutions to protect
against hackers?