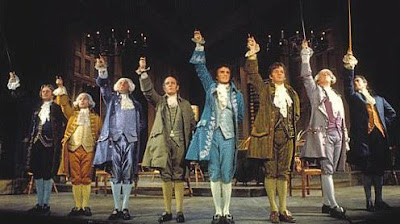 Lewis Morris: Mr. President, have you ever been present at a meeting of the New York legislature? ... They speak very fast and very loud, and nobody listens to anybody else, with the result that nothing ever gets done.

Lew was, for once, wrong. The talking was very fast and very loud and very long but, this time, something did get done ... marriage equality!

Congratulations to the New York State Legislature for finally making me proud of them!
.
Link - Posted by John Pieret @ 6:47 AM

Comments:
It is long overdue, and I am so glad it passed this time.

So not everyone in the US thinks like Michele Bachmann?

How are we supposed to put cameras in everyone's houses now???????

Only a new government agency, the Department Of Traditional Values can effectively police the populace! Why do think we want to cut government spending so much? So we can make room for all that new infrastructure!!!

The Department of Traditional Values . . . !

Would slavery and polygamy count?

33 to 29 is hardly something to be proud of though it is something to be happy about.
Still waiting for a majority of people to vote for gay marriage - I think that will be a tipping point of sorts.

Actualy, it was more than just 33. The Republican leadership could have bottled up the legislation but didn't. The NYS legislature has a long tradition of ducking any hard issue and this time they didn't.

It would need all of 3 votes to reverse the decision, and like California found out to its disadvantage legislating something doesn't mean the decision wont be reversed.

It would need all of 3 votes to reverse the decision

Nope. It would have to get past the Assembly, too, which is heavily democratic and largely from New York City. The law is safe enough unless the entire politics of New York is somehow turned on its head.

The law is safe enough unless the entire politics of New York is somehow turned on its head.
A country that seriously considers a Bachmann or Palin as president ? Ill wait till the people can pass such laws by vote before I make that statement.