What Really Scares the Discovery Institute 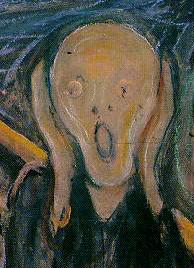 They're trotting out the old creationist bafflegab, claiming that mainstream textbooks contain "bloopers," such as these:

~ long-discredited claims that the appendix, tonsils, and other organs are non-functional "vestigial" organs left over from a blind evolutionary process. In fact, these organs are now recognized by scientists to serve important biological functions.

~ fraudulent embryo drawings originating with nineteenth-century German racist Ernst Haeckel that are used to claim that vertebrate embryos are the same at the earliest stages of development (not true).

The first two are staples of "creation science."

The third was popularized by the execrable Jonathan Wells in his fraud, Icons of Evolution, though Haeckel has long been a target of creation "scientists." The Talk Origins Archive has good resources on Wells' lies, including PZ Myearshertz' article on Haeckel's drawings. Also very helpful is PZ's recent charming but uncompromising talk on the subject.

But that's not the amusing part. The thing the DI is most afraid of is their "friends."

A single curriculum, submitted by International Databases, LLC, attempts to follow the 2009 TEKS by encouraging critical thinking, analysis, and evaluation of Darwinian evolution and the chemical origin of life, using empirical evidence, logical reasoning, experimental and observational testing, including examining all sides of scientific evidence. However, this curriculum also includes intelligent design, which is not required by the TEKS, and which Discovery Institute (the leading intelligent design research organization) opposes requiring in public schools.

And that, of course, is because ID doesn't encourage "critical thinking, analysis, and evaluation of Darwinian evolution and the chemical origin of life, using empirical evidence, logical reasoning, experimental and observational testing, including examining all sides of scientific evidence" but, rather, depends on things like Wells' lies and long discredited creationist arguments.

But if lies and deliberate stupidity is made official policy, instead of snuck in through the back door by individual teachers who are willing to confuse their hapless students in the name of an ideological TruthTM, then courts can more easily detect the constitutional violation and deal with it.

Comments:
The falsehoods of creationists are bad enough. Do we have to endure the same crap from biologists! Although I agree with PZ on most points, in your links, he gets Haeckel all wrong.
1. Haeckel’s drawings appeared in the popular book “The Evolution of Man” written with the intent of disseminating evolution by natural selection among German-speakers. Only crazies have ever, ever charged scientific fraud based on the content of a popular book. Some of Haeckel’s figures were inexact because he did not always have good specimens and had to reconstruct missing elements. Evidence based reconstruction is accepted practice in paleontological projections of extinct animals. Not one of Haeckel’s critics, whether scientist or creationist, has mentioned that his book has almost 1000 pages and contains another 250 illustrations.
2. Haeckel specifically denied that the denounced drawings were accurate depictions of embryos. In “The Evolution of Man” (I have checked the 3rd and 5th editions) the figure legend says they serve to illustrate “the more or less significant similarity that exists, in respect of most important structural features, between the human embryo and the embryo of the higher vertebrates (amniotes) in the earlier periods of development.” The drawings are schematic and Haeckel says so. Moreover, the embryos were used to illustrate general correspondences in the vertebrate body and not, as Myers says, to “prop up” Haeckel’s thesis of recapitulation. He “props up” the theory with 200+ pages of descriptions of the development of vertebrate organ systems.
3. M. K. Richardson & cia. published a series of poorly-detailed embryo photos with irrelevant accessory structures (placenta, yolk sac), printed to different sizes, orientation and body curvatures, with the declared intent of debunking Haeckel and, one might claim, seize fame by sitting on his gravestone.
4. Haeckel and recapitulation have only been discredited in their strawman versions. Stephen Jay Gould (1977, ‘Ontogeny and Phylogeny’) was the last to develop an original argument claiming to discredit Haeckel, while simultaneously declaring invalid all previous claims of debunking. But Gould achieved this by falsely making Haeckel into an orthodox Lamarckian. Gould is now being discredited for falsifying data. So much lying. It makes one suspect that Haeckel was an atheist.
5. Please read real Haeckel scholars like Richard J. Richards and Sander Gliboff for the facts.