Going Down With Creationists 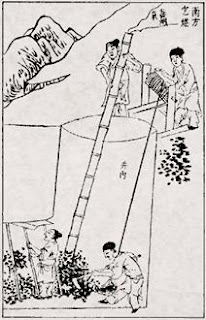 Michael Flannery is a historian of pharmacy, a librarian and a Discoveryless Institute Fellow.

He is also the chief propagandist of the latest DI trope that Alfred Russel Wallace was "an early intelligent design theorist" and that that fact somehow makes ID "scientific." While it is true that Wallace argued that an "unseen universe of Spirit" had interceded at least three times in history: in the creation of life from inorganic matter; the introduction of consciousness in the higher animals; and in the generation of the higher mental faculties in mankind, there is good reason to conclude that Wallace's views were a more or less direct result of his belief in Spiritualism ... just as Intelligent Design advocates views are a result of their belief in Abrahamic religion. While Wallace's views could be taught in a history of science class -- just as the ideas of a much earlier intelligent design theorist, William Paley, who at least had the honesty to call his work "theology," could be -- they could not be taught as if they represented the modern science of evolution.

Now Flannery is making a rather strange argument that "Darwinian Evolution" is "A Scientific Pip-Squeak in a Suit of Cultural Armor."

Basically, he argues, based on a book by Thomas F. Glick entitled What About Darwin?, that:

The point is, the establishment of Darwinian evolution lodged itself securely only in part because of key support from certain scientific figures. Far more significant was the general captivation of a wide ranging intelligentsia from the arts and humanities on both sides of the Atlantic. It is through this broader based support that Darwinism has become dressed in a kind of suit of cultural armor. As such under this Darwinian "habit of mind" Darwin himself "ceases to refer to the real person and becomes an icon."

Well, no kidding! That's why the DI insists on calling all modern evolutionary scientists "Darwinists," despite the fact that the science has greatly moved on since Darwin's day. They are playing on the overwhelming "cultural armor" that religion enjoys in the US and much of the world and can hardly decry the "cultural armor" of Darwin while they constantly play on the "cultural chinks" in that armor.

Glick (whose book I haven't read) apparently makes the sensible point that "there is no real distinction between the scientific channel and the literary channel: they are cut from the same cloth of common culture and common experience" but Flannery disagrees:

If the scientific strength of Darwinian evolution matches its ubiquitous cultural preeminence--if indeed the two coincide with a harmonious verisimilitude--then perhaps we would be all knaves and fools for denying it. However, a careful examination finds a great disparity between the two. Remember Darwinian evolution itself gained its iconic status chiefly by and through the cultural gatekeepers of the affinity group from which it sprang, the tight-knit, class-conscious blood-ties of the Victorian elite. From the beginning scientists had always pointed out difficulties with the theory--Louis Agassiz, St. George Mivart, Alfred Russel Wallace, even Gregor Mendel to name a few--it was the chorus of approbation from a much larger field that gained Darwin's theory it hegemonic status. Yet its power as a scientific paradigm simply doesn't seem to match its public bravado.

Of course, this is a gross misrepresentation of the history of the science of evolution. While Darwin's marshaling of the evidence for the fact of evolution -- i.e. common descent -- was widely accepted scientifically, his theory of natural selection (which is what the DI objects to, or so they tell us repeatedly) was widely discounted in the scientific community until the 20th Century, when it was realized that genetics strongly supported natural selection.

More importantly, Flannery offers scant evidence of the "vulnerability" of evolutionary theory. One is Steve Fuller's "survey" of the scientific literature that supposedly shows that only 12% of biological papers include "evolution" and its variants. I suspect that, if you did a survey of the literature on planetary astronomy, you'd find even less mention of "heliocentricity" and its cognates. That hardly indicates that the theory of the solar system is on the ropes. Fuller is also cited as stating that most references to "evolution" are in its "noncontroversial microevolutionary sense." Besides the fact that this is a creationist distinction that has no relation to any use of the terms by scientists, there is obvious and justified doubts as to Fuller's ability to determine the import of scientific research when he draws such grandiose -- and false --"conclusions" as "neo-Darwinism could be abandoned tomorrow, and most research programs in genetics--and other biological disciplines--would continue apace," based on a word search.

Another is (surprise! surprise!) a quote mine:

Indeed the scientific literature itself is calling the purported paradigm into question. M. Leisola and O. Turunen at Helsinki University of Technology suggest in a 2007 protein engineering study that there is an "overreliance on the Darwinian blind search to obtain practical results. In the long run, random methods cannot replace insight in constructing life-like proteins."

To his credit, Flannery provides a link to the article, which suggests that any dishonesty involves pretending to understand the article or copying it mindlessly from another creationist. Although the article is behind a paywall, the abstract easily shows what is being said:

The extraordinary properties of natural proteins demonstrate that life-like protein engineering is both achievable and valuable. Rapid progress and impressive results have been made towards this goal using rational design and random techniques or a combination of both. However, we still do not have a general theory on how to specify a structure that is suited to a target function nor can we specify a sequence that folds to a target structure. There is also overreliance on the Darwinian blind search to obtain practical results. In the long run, random methods cannot replace insight in constructing life-like proteins. For the near future, however, in enzyme development, we need to rely on a combination of both.

Well, duh! If you are human beings out to engineer "life-like proteins" and can't take tens of thousands or millions of years to conduct planet-wide experiments, the way the process of evolution can, you might have to take some shortcuts. But that just raises the question why a supposedly omniscient and omnipotent god would take all those millions of years and also had to rely on "Darwinian blind search" (don't forget they accept "microevolution"!).

The rest of Flannery's "evidence" is that "so far" we can't explain the nature and origin of human consciousness. Last time I looked, we still can't satisfactorily explain how gravity works at a distance. Does that justify the theory of Intelligent Grappling (sometimes known as Intelligent Falling)?

It would be pathetic if it wasn't for the fact that so many people will fall for such bafflegab.
.
Link - Posted by John Pieret @ 12:00 PM

Comments:
And Leisola is a creationist, of course. You can read about it from this expert:

So this is really all about a conspiracy theory like the Freemasons or the Illuminati?

Remember Darwinian evolution itself gained its iconic status chiefly by and through the cultural gatekeepers of the affinity group from which it sprang, the tight-knit, class-conscious blood-ties of the Victorian elite.

Only in this case it is a group of upper-class Victorian Englishmen - members of a nefarious and devious race that had built up the largest empire the world had ever seen - who are the villains of this piece.

The problem with that theory is that it doesn't really explain why evolution is still the preeminent theory in biology around the world in the 21st century. After all, it is hard to imagine France or Russia, let alone the United States, acquiescing to what would have been viewed as British cultural imperialism in the 19th century, let alone now.

Mind you, speaking now as a Brit, there is a certain appeal to the idea that my forebears had put into effect a cunning plan to establish a secret worldwide cultural hegemony that has lasted into the 21st century.

I can see the possibility of a Hollywood blockbuster here - a sort of "League of Extraordinary Ol' Brit Toffs" as DeNews at UD might put it (and probably will).

You can read about it from this expert

Hee! I should have looked up the authors but it was so clearly unrelated to ID ... as all Discoveryoid peer reviewed papers are ... that it simply didn't occur to me.

The problem with that theory is that it doesn't really explain why evolution is still the preeminent theory in biology around the world in the 21st century.

Sure it does. Cultural elites are like priests and ministers who can perpetuate any ol' nonsense ... um ... never mind ...

I can see the possibility of a Hollywood blockbuster here - a sort of "League of Extraordinary Ol' Brit Toffs" as DeNews at UD might put it (and probably will).

There's even a script ready.

There's even a script ready.

Hey, that's great stuff! All we need now is a screenplay, some backers, a director and a bankable star as the lead. We might have to go light on the heaving breasts, though, in the current climate.

We might have to go light on the heaving breasts, though, in the current climate.

Naw. Once people like Bill Donahue see it four or five times to make sure their denunciations of the sex in it are accurate, the faithful will see it in droves to prove how justified in Christ they are.