Hey! Why Haven't I Heard of This Guy? 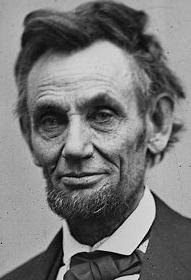 Gary Johnson is a Presidential candidate who says that he supports gays in the military, a woman's right to choose up until the viability of the fetus, the legalization of pot, and that government should not be involved in the bedrooms of consenting adults.

A reasonably rational Republican, who dares to demonstrate it out loud, has no chance ... so why should the media bother?

Instead, the Republican establishment will sweat and work as hard as it can to camouflage the candidates it prefers as faux Tea Partyites, while hoping the Tea Party faithful are as stupid as they think they are.

Comments:
I was wondering if anyone's heard a whirring sound near Lincoln's grave recently.

Ian:
We have him connected to a generator that supplies enough power for a city block.

Franklin, Madison, and Jefferson are next!

In New Mexico they know him well, as just another libertarian tool who wants to privatize the commons. It's nice that he's not a religious nut (or panderer to same), but comparisons to Lincoln are premature.

And Johnson is a standard issue 'ZOMG! THE DEFICIT IS GOING TO KILL US ALL UNLESS WE RETURN TO 1931 RIGHT NOW!!!' Republican.

Not that it really matters. Economically, you guys are toast with everyone to the right of Dennis Kucinich determined to repeat Roosevelt's mistake of 1937. Too bad you're going to take so many of us furriners with you into recession.

Mike you're right--and we're sorry. But even Socialist Party members in the UK are running on deficit reduction. It's a global madness at this point.