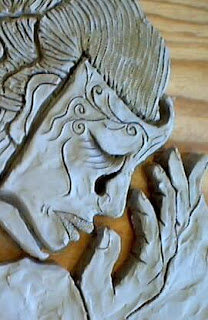 I have refrained from commenting on Elevatorgate because what Rebecca Watson and Jen McCreight (and, from the distaff side, John Wilkins and PZ Megahertz) have already said seemed so right and true that they needed no help from me. Even when Richard Dawkins showed that he is, indeed, human and said something stupid on the topic, I felt no need to add my voice to the cacophony that has erupted.

But this (via PZ) is worth repeating ... as loudly as possible. People sometimes think poetry is all flowers and treacle. It isn't:

1979.
18 years old.
The Army.
Germany, sent out to the field for the first time.
The only woman and 1500 men.
I was the Medic, they were Engineers.
Alone, in the dark being watched, only I didn't know
Vilseck, Germany after two weeks without a shower, we were allowed to go to Tent city for 2 days.
Much Celebrating. Much Drinking. After showers the partying started.
I was invited.
A cute boy
Fun
free drinks
more drinks
Something wrong....
Room spinning
Dizzy
can't walk
being carried
pass out
wake up
can't move
tied up
can't talk
gag in mouth
voices
someone on me
wet between the legs
laughter
another body on me
tears
another body
all night
over and over again
how many?
Don't know
too many
over and over again
thrusting
sweaty
pawing
pain
tearing
more laughter
in and out of conscience
how many?
could be twenty
could be a hundred
all ranks
all sizes
all ages
all penises
all thrusting
all sweating
lots of pain
smell of greasy tent
smell of booze
smell of tobacco
smell of man sweat
smell of semen
smell of sex
all thrusting
all groping
all squeezing
all pawing
only one, who when he saw my tears, stopped in his tracks
But he walked out, and another came in to take his place
over and over again
no help
none in sight
all night long
in and out of reality
in and out of dreams
more body's
more men
more thrusting
how many hours?
finally the sweet release of awareness
awakening
naked
in the showers
bruises and blood everywhere
Pain
oh my God the pain
all consuming pain
my clothing in a pile
scrub
scrub
scrub
scrub
scrub
scrub
scrub
scrub
water is cold
scrub some more
scrub
scrub
scrub
scrub
scrub
scrub
scrub
scrub
put on uniform
met at door, by commanding Officer
stern words about MY behavior
told if I talked, it would be MY fault
Threatened with prison for "enticing"
handed orders to be transfered
Told to pack my bags
Transportation waiting
Warned again
If you talk, you die
or worse
watching blindly as the trees roll by
curling up inside of me
hiding the pain
hoping the pain will fade
as the bruises do
can't walk, can't sit, can't take a shit
blaming myself
Others have
so why not me?
Guilt
it weighs on a mind
remembering what was said
silence it is my friend
denial
lock the pain away
never talk they said
never talk I did
The pain it became my friend
To this day, it never ends.

That is one of the greatest -- and most devastating -- poems I have ever read.

Comments:
It's sort of sad that important issues got lost in all that followed the original incident.

Thank you for posting this.

That poem by 'Doubting Thomas' is indeed powerful and moving. I have read other accounts by servicewomen of similar experiences although none as intense and graphic.

When we read of such conduct by members of the Waffen SS in World War Two, for example, we are shocked but not surprised because of who they were. What is horrifying is when we find some of "our boys" acting in much the same way.

But what is utterly scandalous and appalling is the way the armed forces appear to sweep such offenses under the carpet according to these accounts. It is not just the ordinary soldiers who have escaped justice but the NCOs and officers who must have had some knowledge of what happened yet did nothing - NCOs and officers who should have been looking out for the victims as much as they apparently did for the offenders.

Anyone who doubts that rape and other forms of sexual assault are a serious problem and can have a devastating effect on the victims need only read this poem by 'Doubting Thomas' and the other comments on the draft letter to Richard Dawkins.

Now let me ask some questions.

Does anyone here believe that Richard Dawkins regards rape and other forms of sexual assault as trivial issues or condones such behavior in any way?

Can we reasonably infer from anything in the comments Dawkins posted to Pharygula that he regards rape or any other form of sexual assault as trivial or condones such behavior in any way?

Based on her account of the incident, did what Rebecca Watson experience in the elevator constitute a sexual or any other form of assault under the law?

Based on her account of the incident, did what happened to Rebecca Watson constitute any kind of offense for which the man who approached her could be prosecuted?

"Distaff" refers to female, not male. Or is there some loud irony here that I can't hear because of the wax in my ears?

That poem, though, makes its point loud and clear. I have a niece who was raped while in the Marines.

Or is there some loud irony here that I can't hear because of the wax in my ears?

Based on her account of the incident, did what Rebecca Watson experience in the elevator constitute a sexual or any other form of assault under the law?

Did Rebecca Watson portray it as such? Or did she say that it made her uncomfortable and fearful? And why shouldn't it when nice, clean cut, young American boys can so easily wind up doing what they did to 'Doubting Thomas' and older, power-wielding males will either minimize it or actively cover it up?

FYI, that poem was also posted here in the comments on a CBS News investigation broadcast in 2009 into the incidence of rape in the US armed forces.

Browsing delicious.com I noticed your site bookmarked as: Blogger: Thoughts
in a Haystack. Now I am assuming you book marked it
yourself and wanted to ask if social book-marking gets you a good deal of
traffic? I've been contemplating doing some bookmarking for a few of my sites but wasn't
sure if it would generate any positive results. Appreciate
it.

﻿Hello there,
I know this is somewhat off topic but I was wondering which blog
platform are you using for this site? I'm getting tired of Wordpress because I've
had problems with hackers and I'm looking at options for another platform. I would be awesome if you could point me in the direction of a good platform.

﻿Hey.
I just noticed your webpage: Blogger: Thoughts in a Haystack when I was surfing around
delicious.com. It looks as though someone appreciated your site so much they decided to bookmark it - good job!