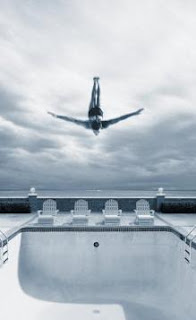 As I noted before, the Giles County (Virginia) School Board had taken the plunge and continued the posting of the Ten Commandments in its schools with the fig leaf of making it a part of a "historic display."

Pulaski and McCreary Counties in Kentucky have been struggling to pay off the $460,000 in legal fees and interest they owe the ACLU for trying the exact same scam that the Sixth Circuit Court of Appeals saw through and the Supreme Court refused to grant certiorari to review.

Now, as noted by Ed Brayton, the ACLU has started a suit against the school board that can hardly be anything but a slam dunk.

Unfortunately, the ones lying hurt in the bottom of the pool are mostly going to be the school kids in Giles County ... both the ones who are having their right to be free of taxpayer-financed majoritarian proselytizing and the ones who will have school resources dumped down the drain of this hopeless attempt to circumvent the Constitution.

P.S. Rob Boston at The Wall of Separation has an article about the dangers of taking on First Amendment cases in rural Fundiland. Naturally, the student and his/her parent who are suing the school board have asked to be anonymous. The comments that have already been circulating are certainly filled with hate, if not overtly threatening.

But this is all you need to know about what's wrong with Giles County:

"You folks are allowing Satin [sic] to rule you!!!" wrote a woman identified in the pleadings as a Giles County elementary school teacher.

The demonizing of fabric is an ugly thing.
.

Comments:
The demonizing of fabric is an ugly thing.

Not as ugly, I'm thinking, as what will happen when these so-called Christians discover the identities of the plaintiffs. And I'm betting it won't be long before they do. It wouldn't surprise me in the slightest to find that there is someone in the legal system in Kentucky who puts their faith before their duties as an officer of the court.

We already know what a brave young girl has had to go through in a place much less hostile than Giles County.