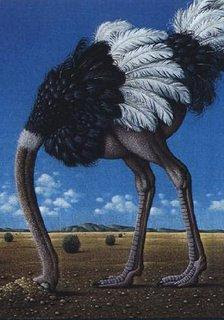 Someone named Stoyan Zaimov at the Christian Post has his/her/its head up one nether region or the other.

Faced with a survey that indicates that young Australians "might doubt their religious roots" (i.e. conservative Christianity), she (I'll arbitrarily assign gender if, for no other reason, it might piss the moron off) manages to deploy the classic tools of denialism as to the possible cause.

According to the Olive Tree Media group survey results, the preaching of eternal Hell, accusations that church figures are not stopping sexual abuse, and the stance against the homosexual agenda are identified as the top factors conflicting the younger population between 18 and 31 years old.

The study also shared that 41 percent of baby boomers between 50 and 65 years old still adhere to Christianity, compared to only 24 percent of young adults.

No, no! ... it can't be the ugly and unenlightened teaching of conservative Christianity ... like calling a movement for human rights an "agenda" ... that is turning young people off!

A number of Australian churches, however, denied there is such a marked trend of people turning down Christianity.

Pastor Mike Kwok from the Fellowship Baptist Church in Sydney told The Christian Post he acknowledges the rising support for the homosexual agenda, but he does not believe the problem is so widespread nor that it causes a division among churchgoers.

Riiight! The 76% of young people who are turned off by attacks on the humanity of gay people are, themselves all gay! That won't turn even more people off!

Pastor Don Modarelli from the Northern Beaches Pentecostal Church in Sydney told The Christian Post there are many religious attitudes and a survey of 1,000 Australians is not enough to accurately measure the current trends.

But if a survey of 1,000 Australians said that Pentecostalism was the fastest growing religion in Australia, I somehow doubt that the number would remain "significant." But let's not forget the anecdotal "evidence" too:

The pastor also said, after reflecting on his 11 years of experience in the ministry, the topic of evolution is probably the most debated issue among flip-flopping Christians. Thus, he claimed, evolution theories are the primary reason for people's doubt in faith, not Christianity's stance on the homosexual agenda.

Comments:
...a survey of 1,000 Australians is not enough to accurately measure the current trends.

1,000 people will give a margin of error of about 3% which goes to show that pastors might not be the best people to discuss statistics.

That is so unfair to ostriches

'the homosexual agenda' -- that phrase is always a tip-off, isn't it?

That is so unfair to ostriches.

This is true. An ostrich's eye is reputedly larger than it brain ... which puts it far ahead of most of the Xnians I'm talking about.