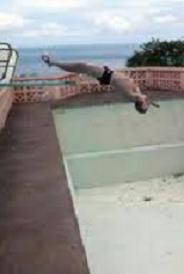 Well, the Giles County (Virginia) School Board's attempted dive into posting of Ten Commandment in a public school is that much closer to the bottom of the empty pool of Constitutional law on the subject.

A judge declined to dismiss a lawsuit challenging a display of the Ten Commandments in a Giles County school Monday, setting the stage for a long legal battle.

U.S. District Court Judge Michael Urbanski said there are too many unknown facts about the case to immediately throw it out for legal reasons.

"Facts matter, so how can I grant a motion to dismiss?" the judge said. "You can't just apply a one-size-fits-all because the facts are very different" in prior court cases involving the Ten Commandments in public buildings.

That refers to Liberty Counsel's (and probably the worst lawyer in America, Mathew Staver's) claim that the school board had nothing to do with the present display, despite all the evidence to the contrary that I've already mentioned.

When the decision is filed online, I'll share any juicy bits.

But that doesn't come close to exhausting Liberty Counsel's and Staver's disingenuousness:

Urbanski delayed ruling on a second issue -- whether the student and a parent who joined in the lawsuit can remain anonymous -- while lawyers try to work out an agreement.

The case has stirred such acrimony in rural Giles County that identifying the student would subject him or her to harassment or worse, according to the American Civil Liberties Union, which filed the lawsuit.

But keeping the names secret runs counter to the fundamental principle of open courts, an attorney for the school board said.

"You can't simply defend a case in the dark," said Mathew Staver of the Christian-based Liberty Counsel. "You can't shadow box when you don't know who's punching."

Staver objected to a protective order suggested by the ACLU that would allow the plaintiffs to keep their current pseudonyms of Doe 1 and Doe 2 and allow them to avoid a court appearance by testifying through deposition.

Although the school board's legal team would know the plaintiffs' identity, the ACLU wants a protective order that would bar them from sharing that information with the board.

"Don't you think that might be appropriate when you have the chairman of the board of supervisors calling these people anonymous cowards?" Urbanski asked Staver at one point during two hours of oral arguments in which he peppered both sides with questions. "That didn't just come from a man on the street, that came from a public official."

The judge was referring to a comment made by supervisors Chairman Eric Gentry during a school board public hearing, that Giles County "won't let an anonymous coward tell us how to run our business."

There is only one issue where the identity of the plaintiffs is remotely relevant and that is "standing." Essentially, if one of the plaintiffs was a student in the school when the display was posted, there is standing. That fact is easily determined by affidavit, in camera examination and documentary evidence from the school. There is no "punching" required by the plaintiff ... if the plaintiff has standing, either the school board's actions were constitutional or they were not and it matters not a whit whether the plaintiff was "offended" by the display; was an atheist, a theist of some sect that does not honor the Ten Commandments or was a Christian who just didn't want officious government bureaucrats foisting their viewpoints on him or her at taxpayer expense.

The only possible reason to reveal the identity of the plaintiffs is so people like Eric Gentry and the other allegedly "good" people of Giles County can make their lives hell and, perhaps, drive them into dropping the suit.

Once again, the people who so loudly proclaim their moral superiority, disprove it at every turn.
.

Comments:
Well done, John. I've been wondering how that case was progressing. (and in your third para from the end, I think you meant 'whit', not 'wit')

It's not an idle fear for the plaintiffs. Non-trivial intimidation after the family's identity was revealed in the administrative hearing, some by teachers and/or coaches, took place in Mt. Vernon during the Freshwater affair to the point that there was sufficient harassment to induce the family to move to another county.

Hello there! This is my first comment here I truly enjoy reading through your posts. Can you suggest any other blogs/websites/forums that deal with the same subjects?

thank you very useful information admin, and pardon me permission to share articles here may help :