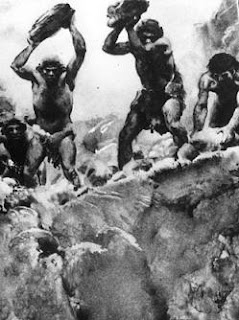 I use to think this was the 21st Century.

America's Protestant pastors overwhelmingly reject the theory of evolution and are evenly split on whether the earth is 6,000 years old, according to a survey released Monday by the Southern Baptist Convention.

When asked if "God used evolution to create people," 73% of pastors disagreed - 64% said they strongly disagreed - compared to 12% who said they agree.

And don't forget that Romney and the however many dwarves are left are off to court these people to become the next President of the United States.

Comments:
As a retired professional survey researcher who has conducted national studies and has peer-reviewed papers in genyoowine scientific journals, I wonder about the following:

Did the Southern Baptist convention sponsor this survey?

What outfit conducted the survey?

How were the questions worded? (For example, I would consider myself as a theistic evolutionist, but because of question wording and data analysis choices, I have been, on these kinds of surveys, categorized as a 'creationist.')

Without knowing that stuff, making conclusions from it is premature.

Considering this is the Southern Baptist Convention, I wouldn't be surprised if the survey was limited to their own denomination, and then mis-worded when it was published.

Some, but not all, of the first Anonymous's questions are answered by LifeWay Research's press release and the accompanying report: http://www.lifeway.com/Article/Research-Poll-Pastors-oppose-evolution-split-on-earths-age.

I wonder whether there has been a survey of pastors on topics such as:

* The literal truth of the Noah's Ark story in all details.

* Moses wrote all, or nearly all, of the Pentateuch.

* The Sun stood still for Joshua.

But we must go after theists, agnostics and atheists who say we must reach out to those 12 percent who believe in evolution.

Adding, I don't doubt the results of this survey much at all - lots of work to do - and that they're wrong about evolution and science. But it also means that's a big block of people to alienate and/or overcome if you insist that they not modify but give up their religion.