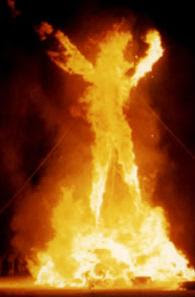 Jason Rosenhouse is one of the more considered of the (newly acceptable) "New Atheists." But I think he misses the mark at several points in his "Another Round on Adam and Eve."

First of all, as is necessary in all such discussions, I have to state explicitly that I am not "defending" Peter Enns or his interpretation of the Bible or his Evangelical beliefs. But it's only fair, while Jason is criticizing Enns, to look at Jason's arguments as well.

Briefly, Enns, who has a Ph.D. from Harvard University in Near Eastern Languages and Civilizations, argues that the "creation stories" of Genesis were never intended as literal truth by their authors:

Ancient peoples assumed that somewhere in the distant past, near the beginning of time, the gods made the first humans from scratch -- an understandable conclusion to draw. They wrote stories about "the beginning," however, not to lecture their people on the abstract question "Where do humans come from?" They were storytellers, drawing on cultural traditions, writing about the religious -- and often political -- beliefs of the people of their own time.

Their creation stories were more like a warm-up to get to the main event: them. Their stories were all about who they were, where they came from, what their gods thought of them and, therefore, what made them better than other peoples.

It is strange to speak of the purpose for which the Genesis stories were designed, since it seems clear they were not designed at all. They began as part of an oral tradition, presumably evolved a bit through frequent retellings, and gradually assumed tremendous importance to the ancients simply by virtue of having been repeated so often.

The Iliad wasn't designed? Homer was a singer of songs in an oral tradition but he had no design in mind? The people who repeated, and, perhaps, changed the songs, had no purpose either?

But then Jason says:

More to the point, to judge from the stories themselves it just seems wrong to suggest that the specifics of how humans appeared were just throwaway details irrelevant to the main purposes of the story. For example, the historicity of Adam and his actions in the Garden of Eden are given explicitly as the factual basis for the need of Jesus' sacrifice.

Is it wrong to suggest that the specifics of how Achilles dragged Hector's body about the walls of Troy were just throwaway details irrelevant to the main purposes of the story? Probably not. But does that mean that Homer and his listeners didn't know it was a story?

And to say "the historicity of Adam and his actions in the Garden of Eden are given explicitly as the factual basis for the need of Jesus' sacrifice" is simply a non sequitur ... unless Jason wants to admit that the purpose of the authors of the Genesis stories was to prefigure Christ.

Jason is right that: "The story of Eve's creation from Adam's rib is given as the explicit basis for proper gender relations in marriage" ... for the storytellers ... but Enns' point is that Evangelicals need not take those storytellers as ... well ... Gospel.

A final point is that nothing Enns says about the purposes of these stories implies that the ancients thought the stories were fictional.

... seems to me to fly in the face of human psychology.

We are Homo storytellis. We spin and harken to stories even when we know they are not true ... or else Shakespeare and a thousand thousand other storytellers would not hold our ears.

Which is not to say Enns has an easy task to convince his co-religionists that the old tales are not literally true. When stories are widely shared enough, it's so much easier to sit by the fire and hear the song ... than it is to think.
.
Link - Posted by John Pieret @ 7:20 AM

Comments:
I suggest taking a look at this book, to see how people of the culture in which the Bible was composed interpreted the Bible:

It gives a selection of interpretations from a couple of centuries around the "turn of the era".

Thanks for the recommendation.

Modern-day myths, namely conspiracy theories, happily abide contradictions. And yes, it's the "big picture" that matters, while the details are much less important.

You can't really say whether people don'take the myths "literally" or not. When they're telling the myth they're probably reasonably sure of the "facts" they're telling, but if the details don't all mesh, well, that's not what's important. It's the conspiracy that is important, or, presumably, the controlling god in ancient myths.

Yes, it wouldn't hurt for these "experts on religion" to learn about actual people and how they think, or indeed, don't so much think.