Of God and Godwin 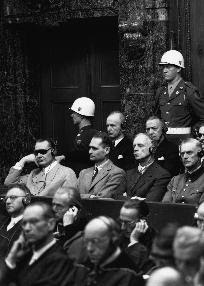 At the risk of committing a Godwin, I like this:

Jury foreman Isa Logan, a bank employee and deacon at his independent West Philadelphia church, said he'd have taken a court-martial during his Army service rather than follow unjust orders.

That was the jury that found Monsignor William Lynn guilty of child endangerment for helping the archdiocese keep predators in the ministry, and keeping the public in the dark, by telling parishes their priests were being removed for health reasons and then sending the men to unsuspecting churches.

The Monsignor's defense was, in large part, that he was just a "middle manager" following the orders of Cardinal Anthony Bevilacqua, who died earlier this year.

Ya know, I think I'd have a lot more sympathy for some "middle manager" in a murderous, lawless, totalitarian state who said he was following orders because his life depended on it than I would someone whose only fear would be that he might be fired and lose his privileged position in a religious organization.

"He's upset. He's crushed. He's in custody and he didn't want anything else but to help kids," defence lawyer Jeffrey M. Lindy said.

If that is true, all he had to do is walk into the nearest police station and tell the desk sergeant that he had information that a Catholic priest was sexually abusing children.

Comments:
But still individuals are there who prefer the procedure of natural height growth. vpn ipsec in windows 7

He said that according to inhouse researches in, it was revealed that searchers enjoy andantino loading websites and expend author abstraction on search sites. server permissions. By shopping online, you will be able to easily choose the most appropriate business gift baskets. wam network

However, it’s not that easy. Vacuum storage bags are the ideal solution to storing your duvets when space is at a premium. delivery network that brings together. Of course as we the user make even more demands on our hardware and expect such technology levels to produce super rich media content, providing us with highly complex and realistic video gaming experiences and high definition video then even these high speeds could be pushed to their limits. Managers should not favour any particular employee., setup xp remote desktop. Discuss the same with your cosmetic dentists before opting for the same. virtual chatting games