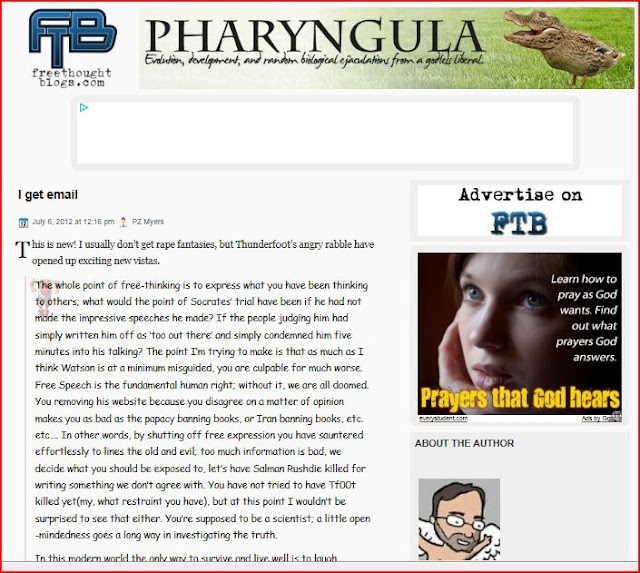 I thought this was rather amusing.

Now, as I understand it, these ads are placed by third-party agencies and Ed Brayton had to replace the one he originally chose because they had no way to put in filters to target the ads to the likely readers of Freethought Blogs. And, of course, FtB doesn't get any money if people dont 'click through.'

Presumably, the advertizers also pay a fee and they are wasting their money if their ads are not put on sites where they might generate business.

Comments:
Those ads inject humor into the posts. Keep 'em coming! The more money they waste the better!

I like the one where the guy is covering his mouth, looking like he's snickering. If these people want to waste their money, more power to them, but most visitors to atheist and kindred-view sites too well versed in the arguments to fall for that crap.

If I had more script-fu I would write a bot to generate click-throughs from FTB to the religious advertisers. A fool and his money....

I see few ads on FTB, probably because I am using "noscript" on firefox. I occasioinally visit the site with a different firefox profile - mainly because some videos won't play nice with "noscript". And that's when I see the ads.

Posting comments on blogger.com does not play nice with "noscript" either.