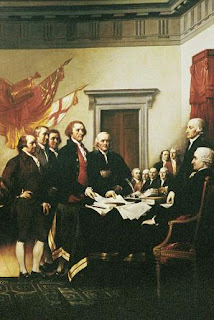 What do the U.S. Conference of Catholic Bishops, the Presbyterian Church (U.S.A.), the Baptist Joint Committee for Religious Liberty, Friends Committee on National Legislation, the Hindu American Foundation, American Baptist Churches USA, the Evangelical Lutheran Church in America Ecumenical and Inter-Religious Relations, the United Methodist Church General Board of Church and Society, the Unitarian Universalist Association of Congregations, the Jewish Council for Public Affairs and the United Church of Christ have in common with Americans United for Separation of Church and State, People for the American Way, the American Humanist Association, Atheist Alliance of America, American Atheists, the Center for Inquiry, the Secular Coalition for America, the Military Association of Atheists & Freethinkers and the American Civil Liberties Union and the NAACP?

They are among the signatories of a letter condemning the lunatic anti-Muslim paranoia of Representatives Michele Bachmann (R-Minn.), Trent Franks (R-Ariz.), Louie Gohmert (R-Texas), Thomas Rooney (R-Fla.) and Lynn Westmoreland (R-Ga.) who see the Muslim Brotherhood lurking under every bed.

It's worthwhile to read the whole thing:

The 42 undersigned religious, secular, interfaith, advocacy, legal and community organizations are united by our work to protect religious freedom for all. As such, we write to raise our voices in protest of your recent letters regarding prominent American Muslim individuals and organizations. These letters question the loyalty of faithful Americans based on nothing more than their religious affiliations and what is at best tenuous evidence of their associations. As such, your actions have serious implications for religious freedom and the health of our democracy.

In your open letters to the inspectors general of the Departments of State, Homeland Security, Defense, and Justice, and the Office of the Director of National Intelligence, you call for an investigation into individuals and organizations that you claim may have ties to the Muslim Brotherhood. The basis for these claims comes primarily from reports by the Center for Security Policy, known for its consistently anti-Muslim agenda.

Those you accuse—including Ms. Huma Abedin and leaders of the Islamic Society of North America, the Muslim Public Affairs Council, and Muslim Advocates—have long-standing histories of positive and committed work to strengthen the United States of America. Furthermore, we take offense to the implications of your actions for the American Muslim community as a whole, as you give momentum to "guilt by association" accusations and betray our foundational religious freedoms.

Senator John McCain (R-AZ) spoke well of the vision of America jeopardized by your approach when he said: "When anyone, not least a member of Congress, launches specious and degrading attacks against fellow Americans on the basis of nothing more than fear of who they are and ignorance of what they stand for, it defames the spirit of our nation, and we all grow poorer because of it." More recently, Rep. Jim Sensenbrenner (R-WI) provided a much-needed reminder about what religious freedom means in the United States: "…the First Amendment prohibits the government from making a distinction between what is a 'good religion' and what is a 'bad religion.'"

Far from supporting the safety of our country, these accusations distract us from examining legitimate threats using proven, evidence-based security strategies. Moreover, we know all too well the danger of casting suspicion on loyal and innocent Americans simply because they hold particular beliefs. We will not stand idly by and allow our country to revive federal investigations into innocent individuals based on their religious adherence. We will continue to speak out in support of people of all faiths and no faith, and the religious freedom of all Americans to practice—or choose not to practice—a religion without fear of criticism or suspicion.

Comments:
There was as attempt to present Bachmann as a much less whacky right-wing alternative to Sarah Palin. Her veering hard right into blatant McCarthyism has put paid to that little fantasy.

This letter is a valuable and necessary rejoinder but the problem is that her hardcore Tea Party support laps up all her nonsense because they're just as paranoid and delusional as she is. For them this letter will just be confirmation that these groups have all been infiltrated by the Muslim Brotherhood and are part of the conspiracy to have the UN take over the US with troops training in secret camps around the country.

Never mind natural disasters like Hurricane Katrina being a divine punishment for tolerating homosexuality or some such idiocy, isn't there an old proverb about those whom the gods wish to destroy they first drive mad? That I can almost believe!

I am glad to see secular and atheist organizations and religious ones working together on this.