The Bible of Science 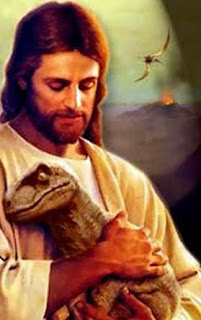 Chadwick Harvey describes himself as "a middle school teacher having spent three years teaching science and social studies. A 2001 graduate of the University of North Carolina at Charlotte with a double major in Religious Studies and History ..."

As you will see, UNC Charlotte has nothing to brag about. Nor does the school district that has a religion/history major teaching science. In a post entitled "Evolution is False: Public Schools Should Teach Intelligent Design," he presents the old canard:

It is ever apparent by the way those who believe in evolution and man-made global warming object to the presentation of alternative viewpoints in the classroom, that they do not have enough faith to allow for comparison. ...

[Y]ou would certainly think that those who propagate these theories would have no fear of a science teacher who presents the information in an unbiased manner so as to encourage the students to use strong critical thinking skills in order to decide for themselves.

From my own educational experience as a public school student, I remember only two things being mentioned in science class in regards to evolution. My 8th grade science teacher who was a Mormon introduced the topic of evolution briefly and simply stated that she did not see why there was such objection to it; for we did not know how God created the Earth. My high school biology teacher made one single mention of the theory of evolution. When the majority of the students in the class expressed that they knew better than to believe in evolution, she quickly brushed over the topic and moved on.

In short, he was never taught the science. And, apparently, his fellow students did have the right to express "alternate views," even if they were arguing against something that they and Harvey were totally ignorant of. Just in case you have any doubt, this is what Harvey thinks an unbiased presentation is:

My own knowledge of evolution actually came from the comparison of evolution to creationism in my high school Bible class, in which we did a several week study comparing the two viewpoints and debating them openly in class.

Because that's where you'd expect to get the best science education after all.

Comments:
My high school biology teacher made one single mention of the theory of evolution. When the majority of the students in the class expressed that they knew better than to believe in evolution, she quickly brushed over the topic and moved on.

Either Mr Harvey's science teacher rejected the theory of evolution herself, in which case she was no more competent to teach science than he is, or she was intimidated by her students and their parents into not explaining it. In the latter case, Mr Harvey has testified that his faith does try to suppress those parts of science which it believes are in conflict with their religion. How they know this, given that they are not taught the subject properly, is not explained. Plainly, the principle of teaching the controversy is more honored in the breach than in the observance.

I also like the way he easily equates ID with creationism. They always know their own