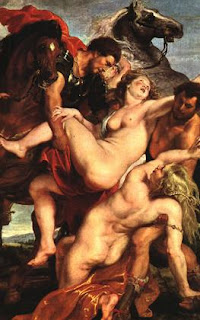 Well, well ... we had Todd Akin, utilizing his bachelors degree in management engineering, and his Master of Divinity degree, giving us his medical opinion that:

If it's a legitimate rape, the female body has ways to try to shut that whole thing down. [Emphasis added]

Of course, he was castigated, even by prominent Republicans, for talking about "legitimate rape."

Then, Scott Lively started complaining about "leftists" (specifically the Southern Poverty Law Center) calling him a hatemonger just because, among many other things, he claims gay people are evil and were responsible for the Holocaust. Curious, I Googled up Lively's website and this was the first thing I saw:

Does a woman's body have a defense mechanism to block impregnation when the attacker is a "legitimate" rapist, meaning in the traditional sense a violent surprise attacker as opposed to, say, the more modern feminist sense of a chosen romantic partner that just won't accept "no" from the woman when she decides during heavy petting that she doesn't want to copulate after all?

Ah! ... So that's the distinction between "legitimate rape" and everything else!

As commenter d cwilson, with tongue firmly in cheek, put it:

Don't these feminists know that once the guy has a wood, she is legally obligated to give it up? Sheesh!

I think we should go on calling Lively a hate monger ... but just add "dumber than dirt" in front.

Comments:
First of all I would like to say wonderful blog!
I had a quick question in which I'd like to ask if you do not mind. I was interested to know how you center yourself and clear your mind before writing. I've had a
hard time clearing my thoughts in getting my ideas out.
I do enjoy writing but it just seems like the first 10 to 15 minutes tend to be wasted just trying to
figure out how to begin. Any recommendations or hints?
Thanks!

Greetings! Very helpful advice in this particular post!
It is the little changes which will make the biggest changes.
Thanks for sharing!

Here is my weblog: microsoft excel