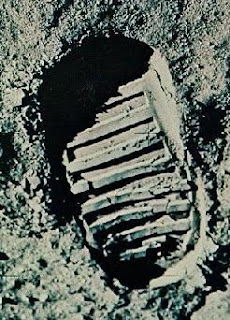 US astronaut Neil Armstrong, the first man on the Moon, has died aged 82.

My parents ("bless" them) woke me up in the middle of the night to watch the moon landing.

It was burned onto my consciousness in ways my parents might later have regretted but I, in every sense of the words, would not have missed it for the world.

Mortality creeps up on us and all our heroes start to die.

Sorely will he be missed.

Comments:
I, too, remember sitting up to watch that grainy black-and-white feed from the moon. I had my moon landing information pack with the wall-chart and diagrams and schedules and glossary of technical terms. It all seemed to bright and optimistic and hi-tech.

Now I have a phone that has more computing power than the whole of NASA at that time. Yet the technical origins of that device can probably be traced back, in a sense, to the tremendous boost to science and technology that came from the program that put that first boot in the dust on the Moon's surface.

As long as we are reminiscing, my favorite astronaut was Mike Collins, the command vehicle pilot for Appolo 11, who never set foot on the moon. Not only did he write the best book by an astronaut, but he won the internet, even before it existed. When there was an argument between Houston and Armstrong and Aldrin about whether they should take a "rest period" after the landing, Collins said words to the effect "Houston, it's hard to sleep with your nose pressed up against the window." It ended all discussion of waiting before going out on the surface.

I was very happy because I could find this very good information
thank you very much for sharing this interesting thing with us.
greetings and good luck always