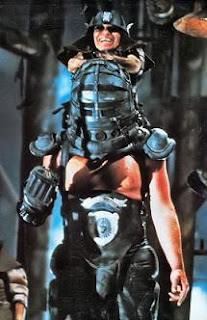 Whom the gods would destroy, they first make mad.

In this case, Kevin D. Williamson, Deputy Managing Editor of the National Review:

It is a curious scientific fact (explained in evolutionary biology by the Trivers-Willard hypothesis ...) that high-status animals tend to have more male offspring than female offspring, which holds true across many species, from red deer to mink to Homo sap. The offspring of rich families are statistically biased in favor of sons — the children of the general population are 51 percent male and 49 percent female, but the children of the Forbes billionaire list are 60 percent male. Have a gander at that Romney family picture: five sons, zero daughters. Romney has 18 grandchildren, and they exceed a 2:1 ratio of grandsons to granddaughters (13:5). When they go to church at their summer-vacation home, the Romney clan makes up a third of the congregation. He is basically a tribal chieftain.

Professor Obama? Two daughters. May as well give the guy a cardigan. And fallopian tubes.

From an evolutionary point of view, Mitt Romney should get 100 percent of the female vote. All of it. He should get Michelle Obama's vote.

Because, after all, "high status" (i.e. rich) males (you know, the ones whose sperm determine the sex of children) are the only ones who should be running a 21st Century country! And human females are, let's face it, just incapable of seeing anything of worth in a man except his earning power.

Hey, here's an idea! ... Instead of having sissy elections, why don't we just put the candidates in Thunderdome? Two men enter, one man leaves ... as President. What could be sexier than that?

That would have as much to do with evolution as Williamson's "idea."

Comments:
Isn't it the case that people in the poorer parts of the world tend to have more children than those in the wealthier West?

Isn't it also the case that, in some regions of the world, female offspring are considered to be such a burden, so worthless, that they are aborted or even quietly done away with?

Sounds like Mr Williams is the sort of Social Darwinist who would approve of such behavior.

You know, I could almost - almost - feel sorry for Romney. With right-wingnuts on your side like Akin, Williams and this judge in Texas predicting civil war if Obama is re-elected who needs enemies?

It's good that "head" is his name ... otherwise, he wouldn't have one.

Saying that as the county's emergency management coordinator he has to "think about the very worst thing that can happen and prepare for that and hope and pray for the best," Head told radio host Jeff Klotzman that he believes "in this political climate and financial climate, what is the very worst thing that could happen right now? Obama gets back in the White House. No. God forbid."

Referring to unexplained "executive orders" and other documents that Obama and "his minions have filed," Head said, "regardless of whether the Republicans take over the Senate, which I hope they do, he is going to make the United States Congress and he's going to make the Constitution irrelevant. He's got his czars in place that don't answer to anybody."

Obama, Head said, will "try to give the sovereignty of the United States away to the United Nations. What do you think the public's going to do when that happens? We are talking civil unrest, civil disobedience, possibly, possibly civil war ... I'm not talking just talking riots here and there. I'm talking Lexington, Concord, take up arms, get rid of the dictator. OK, what do you think he is going to do when that happens? He is going to call in the U.N. troops, personnel carriers, tanks and whatever."

Head vowed to personally stand "in front of their personnel carriers and say, 'You're not coming in here.'

However, not everyone, even in Lubbock, Texas, is crazy:

County Commissioner Gilbert Flores told KJTV he was "ashamed" of Head's remarks, and told the judge, "I think you better plan to go fishing pretty soon."

Attorney Rod Hobson jokingly put up U.N. flags outside his Lubbock office, KJTV reported. "When I saw the story I thought, once again, Lubbock is going to be the laughingstock of the entire nation," said Hobson. "What makes it so sad is he is our elected county judge, who is in charge of a multi-million dollar budget. That is scary. It's like the light's on, but no one is home... I'd just like to think he's off his meds."