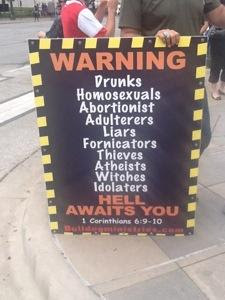 PZ has an amusing sign from the Texas Freethought Convention ... or, more correctly, a sign in opposition to freedom of thought.

Drunks ... been there, done that, even have the T-shirt.

Homosexuals ... I've known quite a few ... as have the sign holders, though they might not "know" (along with a myriad of other things) it ... Almost always found them to be no worse than other people and considerably better than the people who obsess over what others are doing in their bedroom.

Abortionist ... My late wife was raped and had one ... but not without much angst. Oh, wait a minute! ... I was supposed to stone her to death for not being a virgin when we married! Silly me!

Fornicators ... Damn! I knew I was supposed to be doing something during my 31 year marriage! Maybe I should have spoken to Jim Bakker! ...

Thieves ... Now there they have me ... I have to agree that people should not steal from others ... be it land or their lives ... right, Canaanites?

Atheists ... What's to be said? A just and righteous God would take the blame for making people who just couldn't believe in him/her/it. Right?

Witches ... I have to admit that, if I decided to be "spiritual but not religious," Wiccan would appeal to me. The personification of nature in the sort of elusive and enigmatic "gods" you might encounter in a sweet smelling dark wood seem as good ... nay, far better ... than one smiting everything and everyone in sight.

Comments:
Ahhhh, the joys of proof-texting. Did the sign maker read the rest of the Bible?

David was an adulterer and a murderer. Abraham was a liar. Moses and Paul were murderers. Jacob was a liar and a thief. Thomas said (and the English translation really softens this up, it's much harsher in Greek) that he would never believe unless he jammed his fingers into Jesus' wounds, and the way he worded that, it meant "...and that will never happen." Sounds like an atheist (at least when it comes to Christianity) to me. Aaron and Solomon were idolators. Etcetera.

Oh, and the Bible does not talk about abortion.

I kept this because i thought it was so neat:

An engineering professor is treating her husband, a loan officer, to dinner for finally giving in to her pleas to shave off the scraggly beard he grew on vacation. His favorite restaurant is a casual place where they both feel comfortable in slacks and cotton/polyester-blend golf shirts. But, as always, she wears the gold and pearl pendant he gave her the day her divorce decree was final. They're laughing over their menus because they know he always ends up diving into a giant plate of ribs but she won't be talked into anything more fattening than shrimp." "Quiz: How many biblical prohibitions are they violating? Well, wives are supposed to be 'submissive' to their husbands (I Peter 3:1). And all women are forbidden to teach men (I Timothy 2:12), wear gold or pearls (I Timothy 2:9) or dress in clothing that 'pertains to a man' (Deuteronomy 22:5). Shellfish and pork are definitely out (Leviticus 11:7, 10) as are usury (Deuteronomy 23:19), shaving (Leviticus 19:27) and clothes of more than one fabric (Leviticus 19:19). And since the Bible rarely recognizes divorce, they're committing adultery, which carries the rather harsh penalty of death by stoning (Deuteronomy 22:22)." "So why are they having such a good time? Probably because they wouldn't think of worrying about rules that seem absurd, anachronistic or — at best — unrealistic. Yet this same modern-day couple could easily be among the millions of Americans who never hesitate to lean on the Bible to justify their own anti-gay attitudes.

[from `And Say Hi To Joyce' by lesbian columnist Deb Price]

And, of course, there is the standing admonition to the judgemental (or, maybe, even just plain "mental")

Ladies and gentlemen, I give you Matthew 7, verses 1-5!

1 Judge not, that ye be not judged.
2 For with what judgment ye judge, ye shall be judged: and with what measure ye mete, it shall be measured to you again.
3 And why beholdest thou the mote that is in thy brother's eye, but considerest not the beam that is in thine own eye?
4 Or how wilt thou say to thy brother, Let me pull out the mote out of thine eye; and, behold, a beam is in thine own eye?
5 Thou hypocrite, first cast out the beam out of thine own eye; and then shalt thou see clearly to cast out the mote out of thy brother's eye.

He that is without sin among you, let him first cast a stone at her.

And, of course, wasn't it Moses who got drunk and naked and, when Ham sees him that way, curses his grandson Canaan? Oh, wait! ... he was drunk, wasn't he?

That was Noah. Plus "seeing someone's nakedness" is a euphemism, so we can add incest to the mix. I didn't see that condemned on the sign, though.

Come to think of it, 'feet' is another Biblical euphemism, in this case for genitals. So when Ruth uncovers Boaz'. . . er . . . feet and lies down there, I guess we can add some fornication there. And to make it even better, her mother-in-law advised her to do that.

Hi, Joyce! And amen to those, and I'll add "Whoever does not love does not know God, for God is love." (1Jo 4:8 NRS), and, "Those who say, "I love God, and hate their brothers or sisters, are liars; for those who do not love a brother or sister whom they have seen, cannot love God whom they have not seen." (1Jo 4:20 NRS)

Of course it was and I meant to type that ... but early Sunday mornings were made by God to rest from accuracy.

Amen to that too.

-- pew "no rest for the wicked" sitter

Come to think of it, 'feet' is another Biblical euphemism, in this case for genitals. So when Ruth uncovers Boaz'. . . er . . . feet and lies down there, I guess we can add some fornication there. And to make it even better, her mother-in-law advised her to do that.

Euphemisms can be so confusing. I used to read a lot of Victorian English novels and remember being puzzled how obsessed the men of that period were with women's necks - until I finally learnt they were actually referring to something a little lower down.

Also see Exodus 4:24-26, and Wikipedia on that:
Zipporah at the inn

Just a normal day really. Us Humans beings as a mixed bag with that capacity to either be compassionate or to hurt ourselves and others. All the sins mentioned have the capacity to harm and the biblical stories are about redemption through faith and transformation as seen in modern day stories such as www.Marialandon.co.uk