Does Mercedes Make a Clown Car? 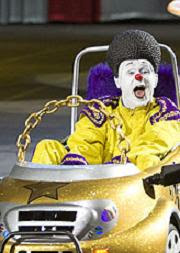 Then Donald Trump must own a fleet of them!

Is there a more ridiculous public figure in America today?

His latest is his announcement that he would announce "Something very, very big concerning the president of the United States. It's going to be very big. I know one thing — you will cover it in a very big fashion."

Well, here it is:


A STATEMENT FROM DONALD J. TRUMP

New York, October 24, 2012 - President Obama is the least transparent President in the history of this country. Sadly, we know very little about a large portion of our President's life and, fact, he has spent millions of dollars in legal fees to make sure that it stays that way. I am very honored to have gotten President Obama to release his long form birth certificate, or whatever it was that he released. This was something that neither John McCain nor Hilary Clinton were able to get him to do during their very long and bitter political campaigns despite the fact that they were strong in demanding it's release (nobody knows why he would not do it). Many Americans have serious questions — questions that should not be part of the presidential dialogue. Over the course of the last year, millions of people have contacted me via my social media pages (Twitter.com/realDonaldTrump, Facebook.com/DonaldTrump) seeking my assistance to have this extremely important issue settled once and for all While they may have the thought and concern, they feel that they lack the ability to get this done. Essentially, a large portion of American people are; asking me to serve as their spokesperson.

It is for this reason that I have a deal for the President — a deal that I do not believe he can refuse. If Barack Obama agrees (or has the universities and colleges agree) to give all of his college records and applications and if he provides all of his passport records/and applications, I will give to a charity of his choice (inner city children in Chicago, American Cancer Society, AIDS research, etc.) a check for five million dollars. The check will be given immediately after he releases the records so stated, or causes said records to be released. If he chooses to do this, he will be doing a great service not only to the charity, but also a great service to the country and indeed, himself.

If he releases these records it will end the question, and indeed the anger, of many Americans. Their President will become transparent like other Presidents. So all he has to do to collect five million dollars for a charity of his choice, is get his universities and colleges to immediately give his complete applications and records and also to release his passport information. When he does that to my satisfaction, and if it's complete, the check will be delivered immediately. A lot of people will be very, very happy to see this happen.

Frankly, it's a check that I very much want to write, I absolutely would be the most happy of all if I did, in fact, make this contribution through the President to a charity of his choice. One caveat -- the records must be given by October 31st at 5pm in the afternoon. So, Mr., President, not only will I be happy, and totally satisfied, but the American people will be happy and the selected charity will very, very happy. Than you, Mr. President!

Because, of course, the President of the United States should dance to the tune of and meet the 'deadline' of a buffoon obsessed with lunatic "birther" nonsense, whose main claim to fame is inheriting a real estate fortune, losing it, sort of recovering it, divorcing trophy wives and being a "reality television" star. And of course the President should do this to the "satisfaction" of someone wearing roadkill on his head!

The sad thing is that there may actually be some media outlets that will treat this as a "story" rather than a joke.

(Which is not to say I didn't enjoy the post)

Yeah, blogger has made it difficult of late ... I think I've got it right, though blogger keeps telling me I haven't.

For a long time, Trump has been a publicity-hound and a political gadfly. Now it seems he wants to be Orly Taitz in drag.

Oh, and what would be much more useful to voters is if Trump were to find out from Mitt Romney what - if anything - he really believes in and are there any policies that he would actually stick with from one year to the next.

There's a scary theme for Halloween!

Everything is very open with a very clear explanation of the challenges.
It was really informative. Your website is useful. Many thanks for sharing!