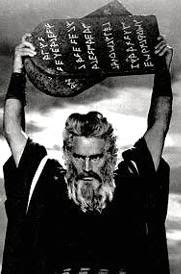 That's what the Righteous Right keeps telling us they have:


The maintenance of civil order in society rests on the foundation of family discipline. Therefore, a child who disrespects his parents must be permanently removed from society in a way that gives an example to all other children of the importance of respect for parents. The death penalty for rebellious children is not something to be taken lightly. The guidelines for administering the death penalty to rebellious children are given in Deut 21:18-21:

This passage does not give parents blanket authority to kill their children. They must follow the proper procedure in order to have the death penalty executed against their children. I cannot think of one instance in the Scripture where parents had their child put to death. Why is this so? Other than the love Christ has for us, there is no greater love then [sic] that of a parent for their child. The last people who would want to see a child put to death would be the parents of the child. Even so, the Scrpture [sic] provides a safe guard to protect children from parents who would wrongly exercise the death penalty against them. Parents are required to bring their children to the gate of the city. The gate of the city was the place where the elders of the city met and made judicial pronouncements. In other words, the parents were required to take their children to a court of law and lay out their case before the proper judicial authority, and let the judicial authority determine if the child should be put to death. I know of many cases of rebellious children, however, I cannot think of one case where I believe that a parent had given up on their child to the point that they would have taken their child to a court of law and asked the court to rule that the child be put to death. Even though this procedure would rarely be used, if it were the law of land, it would give parents authority. Children would know that their parents had authority and it would be a tremendous incentive for children to give proper respect to their parents.

Oh, and by the way, the moron who wrote this, one Charlie Fuqua, is a candidate for the Arkansas House of Representatives.

Comments:
Some one should ask Mitt Romney if he is content to belong to the same party as men who believe such things.

I don't think we need to ask ... have you heard any complaint from Mittens since the RNC decided to resume funding of Todd Akin's campaign?

So I think I have this straight. If you think that women should be denied the right to have an abortion but given the authority to have the child stoned to death if they get out of hand, you’re “pro-life.” All cleared up now.

Mittens, being a clever pragmatist, will say whatever he thinks his audience wants to hear without a qualm. I'm hoping that Obama is taking a long view of the debates and is just Biden his time before going for Mittens jugular.

What is in the water of Arkansas? There was also state Rep. John Hubbard claiming slavery was a "blessing in disguise" for Africans taken across the sea; and state Rep. Loy Mauch, who has a history of writing pro-slavery, pro-Confederacy letters to editors and said, “If slavery were so God-awful, why didn’t Jesus or Paul condemn it, why was it in the Constitution and why wasn’t there a war before 1861? The South has always stood by the Constitution and limited government. When one attacks the Confederate Battle Flag, he is certainly denouncing these principles of government as well as Christianity.”

I think you have to accept that you are always going to have such people in a any large population. It's like Christianity harbors extreme right-wing pastors or so-called churches like the Westboro Baptists. Minnesota Public Radio had an interesting piece about how Germany is contending with a resurgence of extreme right-wing Nazi-style groups, and this after - or maybe even because of - mandatory anti-Nazi indoctrination classes in their schools.

Oh, sure. That's not the problem! What we have here is a major political party giving financial and political support to people who are beyond being called "the fringe." The Republican Party is getting to the point where it should be renamed the "John Birch [and worse] Party."