And So We Say: Evolve! 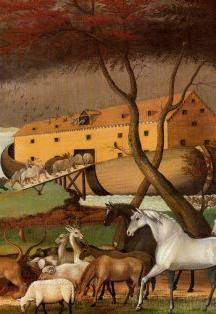 
While geological thought has evolved over the past several centuries, Christianity has too—to the point where several varieties of creationists now argue bitterly amongst themselves. Young-Earth creationists believe the world is fewer than 10,000 years old and that Noah's Flood remodeled it into the topography we know today in one fell swoop a few thousand years ago. Old-Earth creationists accept geological evidence and endorse ideas such as the gap or day-age theories and progressive creationism (also known as theistic evolution), through which God guided evolution in creating the diversity of life. The latest step in the evolution of creationism is based on repackaging as intelligent design the inherently untestable assertion that God designed the world with a particular purpose or goal in mind. Today, after losing repeated court battles over efforts to teach creationist views in science classrooms, the creationist strategy appears to have shifted to promoting efforts to question evolution.

Generally left out of the resulting "debates" is the simple fact that creationists lack any independently supported geological evidence to support their views. The late Harvard paleontologist Stephen J. Gould described a global flood as "the only specific and testable theory the creationists have offered," noting that "the claim that creationism is a science rests above all on the plausibility of the biblical flood" (Gould, 1982, p. 12, 10). And yet, the geological case for a global flood that creationists offer as an alternative to evolution was discredited before Darwin set foot aboard The Beagle.

Geologists assess theories by how well they fit data, and creationists evaluate facts by how well they fit their theories. This simple distinction frames an unbridgeable intellectual rift. Nowhere is this divide deeper than over how to interpret the story of Noah's Flood, for the ideas invoked to explain such an event have been refuted time and again, and there is no geologic evidence of a global deluge. Following Whitcomb and Morris, today's creationists continue to pick and choose evidence to support beliefs their faith inspires. Given the ongoing conflict over what to teach in science classrooms, perhaps teaching the historical evolution of creationism offers a fresh way for students to learn about the history of geology, and thereby our knowledge of the world and how it works. How many creationists today know that modern creationism arose from abandoning faith that the study of nature would reveal God's grand design for the world?

One of the interesting features of the book is how many of the recent YEC ideas were considered seriously and rejected in the 18th-19th centuries.

I think the reason why Noah's flood is so prominent among creationists today as opposed to, say, the Tower of Babel, is because the story was given a "boost" in the 18th and 19th centuries. During the colonial era, western countries were introduced to different cultures around the world, many of which had their own flood story. Many westerners therefore saw these stories as corroborating evidence.

"During the colonial era, western countries were introduced to different cultures around the world, many of which had their own flood story. Many westerners therefore saw these stories as corroborating evidence."

Yes, I still get people arguing this. But of course multiple flood stories - with very different descriptions of the means of survival - do not corroborate the story in which Noah and his family were the only survivors.

Well, good to know that lumping theistic evolutionists in with creationists - as popularly understood.- is a growing political strategy.
John, I know you use it in a more academic sense, but per the previous discussion I couldn't participate in with you, I do believe this is a redefining of creationism. And it's not just an american-centric definition.
I think this excerpt from the BCSE covers what I mean:
http://bcseweb.org.uk/index.php/Main/Creationism

"Creationism in the broadest sense is the belief that the existence, nature, or development of the Universe is the result of some kind of purposeful activity by a supernatural being. As a broad philosophical or religious position, this is compatible with the practice of science, which can then be regarded as the study of the manner in which this supernatural being operates. BCSE is neutral on this, as on all religious issues, provided it is not used to deny, replace, or undermine science.
Our concern is with the modern Creationist movement, allied to religious fundamentalism and biblical literalism, and often also to specific political agendas. This considers humankind, and different species in general, to have been produced by separate acts of special creation, rejects the historical fact of biological evolution, commonly denies the evidence for the antiquity of the Earth, and is therefore fundamentally incompatible with our entire body of knowledge in the areas of biology, geology, astronomy, and cosmology. Creationists in this sense seek to undermine science education, and the public understanding of science. They are active, well funded, and politically organised in the US and increasingly in the UK, as well as in other parts of the world."

So in those two paragraphs, they make it very clear that when they say creationists they're specifically discussing those who seek to undermine science education. Yes, they acknowledge the abstract meaning in the first paragraph, but they go on to focus it on th modern understanding of creationism. And if you go to the blog on their site, you can see it used in that context there.

I see no such differentiation in that essay.

Here's another item from Britain

"Remember the three key arguments that Creationists are trying to present:
This is Science versus Christianity. Science = Atheism. Creationism = Christianity.
The science is wrong or at least debatable. A scientific controversy exists.
Lets be fair and cover both sides. "

But look at the diagrams at the end of the post.