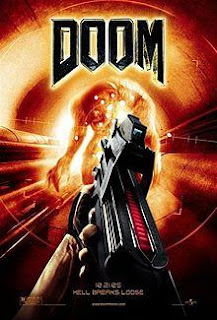 Okay, so I'm watching Doom ... based loosely on the video game series.

It stars The Rock (Dwayne Johnson) as Sergeant Asher, Karl Urban (of the new Star Trek and The Chronicles of Riddick) as Sergeant John "Reaper" Grimm and Rosamund Pike as Grimm's sister, Dr. Samantha Grimm.

Very briefly, there is some sort of ancient teleporter found on Earth that takes you to Mars ... but there be monsters! ...

The Grimms are the children of scientists employed by Union Aerospace Corporation who died at the facility. Brother and sister have been estranged since she decided to remain at the facility to do sciencey things and he decided to go off to do Mariney things.

When they reunite, they have this kind of family moment when Dr. Sam explains that they have found humanoid fossils (and DNA) on Mars. After Sgt. Grimm basically says 'So what?' the dialogue goes (roughly) as follows:


Dr. Sam: Look at this! [Dialing up a computer display]

Sgt. Grimm: I'm not a geneticist.

Dr. Sam: That makes them genetically perfect ... without disease or deformity ... and stronger, faster, smarter than humans.

Ummm ... no. It makes them chimpanzees or gorillas or orangutans or gibbons.

Needless to say, the willing suspension of disbelief kinda died at that moment.
Link - Posted by John Pieret @ 12:45 AM

Comments:
Sorry, John. I couldn't get past "Okay, so I'm watching Doom..."

Now if it had been Doomwatch...

My husband is a doctor, and we rarely watch medical shows because the errors drive him crazy. My favorite:

Him: "Oh, for -- !! Oh come on people. Why the $@^$ didn't they check the cervix! A medical student would have known that!" (Lather, rinse, repeat this rant through commercial break)

Me: "Honey, this is network television! Women don't have those on TV!"

Him: "That is just irresponsible." (He stalks off muttering.)

Isn't Doom the sort of movie you watch with your inner Crow and Tom Servo?

Isn't Doom the sort of movie you watch with your inner Crow and Tom Servo?

When I first turned it on, I had never heard of it. It was from a major studio (Universal) and had Karl Urban, who has done some good work. Even The Rock hasn't (always) made a fool of himself on screen.

Once the chromosome gaffe came up, maybe 20 minutes into the film, I lost interest in the movie in order to prepare the post. By the time I finished, I was regaled with a 4-5 minute sequence where the "movie" was, in fact, a first person shooter game where all you saw was Grimm's gun as he goes around corners shooting whatever pops up. Crow and Tom were too stunned to say anything.

My husband is a doctor, and we rarely watch medical shows because the errors drive him crazy.

I have the same problem with lawyer shows. I could watch Law and Order because it was mostly about the investigation and the way prosecuters and defense lawyers game the system. But I'd still yell at the TV when the defendant somehow got to sum up last or at other procedural mistakes.

I confess to enjoying procedural shows, although best when they are written by someone who knows the subject. As a Brit by birth I enjoy the Rumpole of the Bailey and the gentle fun they poke at the eccentricities of the British legal system. I also have a great fondness for the 1957 version of Witness for the Prosecution although mainly for the pleasure of watching Charles Laughton in a role he clearly relishes.

Yes, Rumpole was fun (and not being aware of British procedure, there was no occasion for television yelling). And Laughton was great in Witness.

Watching L&O once with a friend who does criminal defence put me off the show for good. Of course, it had the L&O trifecta: argument over the qualification of an expert in front of the jury, a witness's criminal record coming out only on cross examination and the fact a witness was testifying in exchange for a deal only coming out in cross examination. Don't know about America.

Rumpole, on the other hand, withstood her scrutiny. Of course, Rumpole's creator, John Mortimer had himself been a barrister of some note. Rumpole is generally very well regarded by the legal profession here while L&) is not.