Another Fine Mess You've Gotten Us Into, Orly! 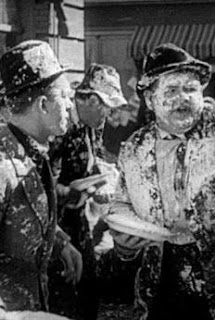 Orly Taitz is at it again!

She has pissed off another Federal judge.

You may remember that Orly got herself a $20,000 sanction from Georgia Federal District Court Judge Clay Land for, among other things, filing "complaints and motions without a reasonable basis for believing that they are supported by existing law or a modification or extension of existing law;" for using the courts "as a platform for a political agenda disconnected from any legitimate legal cause of action;" and, worst of all, for "recklessly accus[ing] a judge of violating the Judicial Code of Conduct with no supporting evidence beyond her dissatisfaction with the judge's rulings."

Now she has extended her repertoire to Federal District Court Judge Andrew J. Guilford in California.

Judge Guilford has every reason to be miffed. He is the lucky duck who was assigned to preside over the libel case against Orly brought by the other birther queen ... um ... king ... er ... whatever ... Philip J. Berg. The suit was filed [it was transferred to the California District Court in 2011 from a Pennsylvania Disctict Court where it had been filed in 2009 - JP] and there are almost 600 filings of papers, motions, rulings, etc. to date [still a very high number - JP]. Most cases I've seen lasting that long have fewer than 100 filings. The batshit crazy must be thick on the courtroom floor.


The Hearing ("Hearing") held in this case on October 15, 2012, increased the Court's concern about the demands this case is making upon the limited resources of this Court. ... This case has wasted huge amounts of time, but very little time has been focused on the substance of the actual dispute at issue. Instead, both sides have expended incredible amounts of time calling each other names and fighting over peripheral issues.

At the hearing, the name calling continued. The oft-repeated charge that one of the plaintiffs is a felon was again raised, apparently implying that felons should not be allowed to bring civil lawsuits in our courts. It was reported that Attorney Taitz is subject to disciplinary proceedings in the Ninth Circuit for alleged misrepresentations concerning Attorney Berg's disciplinary status. It has also been reported that Attorney Berg and Attorney Colen have been or are involved in disciplinary actions, and the latter confessed to "anger management" issues. ...

As the hearing came to an end on a very busy law and motion day with many attorneys in the Court on many other matters, Attorney Taitz said that she wished to speak. In the past, this has resulted in extensive speeches attacking a variety of people and not focusing on the matters at hand or the substance of this dispute. Before allowing Attorney Taitz to take time away from the many other pressing matters before the Court, the Court simply asked that she begin by stating what action she was seeking from the Court. Since Attorney Taitz has sought and obtained a stay of actions against her, the Court believes that she should be limited in seeking actions against others while the stay is in effect. Despite receiving multiple opportunities to simply begin by stating what she was seeking, Attorney Taitz was unable to do so and then acted extremely unprofessionally in this Court of the United States of America by rolling her eyes and exhibiting gestures of contempt.

The Court is now considering what action it should take so that the limited resources of this Court – and taxpayer dollars – might not be further wasted in this case. Possibilities include a published opinion outlining all the misconduct that has occurred, orders prohibiting certain attorneys from further representation in this matter, and dismissals of claims. For now, the Court makes the following orders:


Concerning the pending ethical matters, the parties are ORDERED to inform the Court immediately of any actions taken on pending ethical, disciplinary, or related matters concerning any of the parties now appearing in this case. The Court will likely take further action on such matters only after such notification is provided. ...

If that sounds ominous, it's probably because it is ... at least to the lunatic fringe of the legal profession.

But it gets worse for Orly. On January 23, 2013 the judge issued the following order:

The Court therefore now ORDERS Taitz to show cause in writing why she should not be sanctioned for lying to this Court.

Now, its not clear (even to Judge Guilford ... his order ends with a note about submissions on the order to show cause to the effect that "[p]articularly helpful would be documentary proof of the nature of and reasons for the subject sanction previously ordered against Taitz") whether the allegation concerns the state court sanctions Orly got for abuse of process in her attempt to subpoena Occidental College's records on President Obama or something else.

What seems to be crystal clear is that Orly is cruising for another bruising.
Link - Posted by John Pieret @ 10:50 PM

Comments:
Fastidious respond in return of this query with firm
arguments and describing everything regarding that.

Here is my weblog: santa monica apartment
my page > apartments for rent