Getting Off the Wrong Side of History? 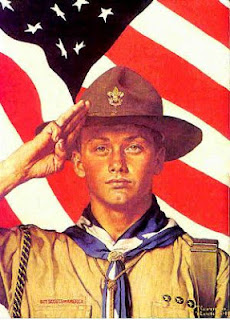 
The Boy Scout of America is considering ending its longstanding national membership restrictions based on sexual orientation.

Under the change now being discussed, the different religious and civic groups that sponsor Scout units would be able to decide for themselves how to address the issue — either maintaining an exclusion of gays or opening up their membership.

Monday's announcement of the possible change comes after years of protests over the policy — including petition campaigns that have prompted some corporations to suspend donations to the Boy Scouts.

Deron Smith, a spokesperson for the Boy Scouts of America, said in a statement that the BSA is discussing potentially removing the national organization's restriction, allowing membership and the selection of scout leaders to be determined by local chartered organizations "consistent with each organization's mission, principles, or religious beliefs.

"The policy change under discussion would allow the religious, civic, or educational organizations that oversee and deliver scouting to determine how to address this issue," Smith said.

One has to wonder if the Boy Scouts would allow the religious, civic, or educational organizations that oversee and deliver scouting to address the issue of whether or not to allow blacks or Jews into their local troops.

Who knows ... maybe atheists and agnostics will someday be deemed acceptable to the Scouts!

Dennis, don't you ever learn?

Thank you. I enjoyed the line,
'there was no log-cabin birth for the man who is known as the 'father of evolution.'"
There was no manger either, much to the chagrin, I suspect, of Luther Flint (of Sandwalk comment fame)