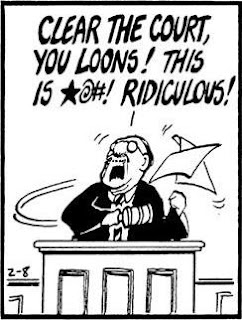 This was in connection with a temporary restraining order the Taz sought from a Federal district court in California to prevent President Obama's inauguration. While Judge Morrison C. England, Jr. treated her motion with some sobriety, his feelings about being Orlified couldn't help but leak out:


At the hearing, Plaintiffs' counsel argued that "common-sense" demands the Court interpret the United States Constitution as requiring the President of the United States to have a valid birth certificate, social security number, and selective service certificate. However, in deciding the merits of a case, the Court cannot simply rely on suspicions and what Plaintiffs claim is "common sense." To be clear, the Court understands that "common sense," has its place in the political process. However, courts must base their decisions on the Constitution, statutes, rules, and regulations passed by the legislative branch and signed into law by the executive branch.

Well, if you're going to assume that Taitz has any clue what the Constitution, statutes, rules, and regulations say ...
Link - Posted by John Pieret @ 12:15 PM

Comments:
I found this in Wikipedia:

Vexatious litigation is legal action which is brought, regardless of its merits, solely to harass or subdue an adversary. It may take the form of a primary frivolous lawsuit or may be the repetitive, burdensome, and unwarranted filing of meritless motions in a matter which is otherwise a meritorious cause of action. Filing vexatious litigation is considered an abuse of the judicial process and may result in sanctions against the offender.

A single action, even a frivolous one, is usually not enough to raise a litigant to the level of being declared vexatious. Repeated and severe instances by a single lawyer or firm can result in eventual disbarment.

Just how many strikes does she get before she's out?

Just how many strikes does she get before she's out?

As a practical matter, a vexatious plaintiff has to haunt a particular court before that penalty is imposed. On the other hand, Federal judges have much shorter fuses in this regard than state judges. Taitz is probably sailing close to the line of the Federal courts doing something. She has been sanctioned once or twice by the Feds and all, as far as I know, of her birther cases have been dismissed on motion.

Total disbarment must come from the California bar association (again, something that is not -- at least in the absence of actually stealing client's money -- easy to provoke) but the Feds could remove her right to practice before their courts.

She has even provoked SCOTUS so if any judge was to suspend her right to practice (which other Federal courts could easily follow) there'd be no tears shed anywhere in the Federal system. There would, of course, be the de rigueur charges of treason, et al. but I suspect most Federal judges would survive that.