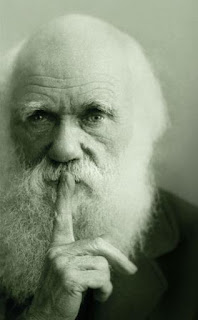 
Newton's real claim to fame was that he had come up with the cause of the precisely observed but as yet unexplained orbits of the Copernican Revolution— gravity. It was this that made him the icon of science to Darwin's mentors. However, what exactly does one mean when one talks of "cause"? It is clearly something that makes other things work or move, but how does one know that one has a cause? How does one know that one has what Newton somewhat mysteriously called a vera causa or "true cause"? Here the authorities divided somewhat. [John F. W.] Herschel was more of an empiricist and wanted observational evidence, direct or indirect. [William] Whewell was more of a rationalist and wanted a sufficient explanation of all the facts, even if we do not see the cause at all.

Thus, for Herschel, the example was of the attraction between the earth and the moon. How do we know that gravity is a vera causa keeping the two together? Because we have all seen objects drop to the ground or have swung a stone around at the end of a piece of string and felt the pull required to keep the stone from flying off. We have directly sensed the cause— or something analogous. Empiricist though he may have been, Herschel thought that all natural force was a product of God's will, as the tug on the circling stone is a product of our will. Whewell would have none of that. He wanted a kind of global explanation, with the vera causa to bring together and unite diverse phenomena under a single explanation. He referred to this unifying feature of a theory as a "consilience of inductions."


The Consilience of Inductions takes place when an Induction obtained from one class of facts, coincides with an Induction from another different class. This Consilience is a test of the truth of the Theory in which it occurs." (William Whewell, Philosophy of the Inductive Sciences, p. 1840)

"Consilience" comes from the same root as "reconcile," and inductions are logical arguments based on observations. Thus a consilience of inductions is the bringing together of scientific observations derived from different disciplines and showing that they have a common cause. Newtonian physics met this ideal because a single entity, gravity, could be shown to explain phenomena as diverse as the movement of planets around the sun, of the moon around the earth, ocean tides, or the fall of an apple from a tree.

To grasp the difference between Herschel and Whewell's philosophy, think of a murder. We find a body lying in a pool of blood with a murder weapon, a knife, lying beside it. After an investigation, someone is charged with the murder. Why? Did the investigation reveal a vera causa? A Herschelian would be satisfied only if the accused were seen killing the victim. A Whewellian would instead be satisfied with the establishment of a means, motive, and evidence that directly linked the accused with the crime, such as his fingerprints on the knife. Why should we need eyewitness testimony? Evidence alone can establish guilt. ...

We can see Darwin's dedication to Herschel's emphasis on vera causa in the opening chapter of the Origin, where he begins with a discussion of artificial selection. Darwin, who grew up in a rural district during the British industrial revolution, had seen artificial selection in action. ... Darwin, coming from rural Britain— his uncle Josiah was a gentleman farmer trying to upgrade sheep production— knew all about breeding. So, early in his quest for a mechanism, Darwin sensed that selection, which meant breeding from the good forms and rejecting the inadequate, was the key to organic change. ...

... By introducing artificial selection and then arguing to natural selection, he was providing a Herschel-type vera causa. He was arguing from a force we know, a force we cause ourselves, to a force of nature. ...

The big problem now facing Darwin was how to get a natural equivalent of the breeders' artificial selection. What could make a force so strong and persistent that selection could operate efficiently in the wild?

At the end of September 1838, Charles Darwin read a late edition of Thomas Robert Malthus's Essay on the Principle of Population, where Malthus observed that human populations can increase in size faster than does their ability to produce food, causing a struggle for existence. At once Darwin seized on this struggle, generalizing it to animals and plants. Darwin put exponential population growth together with artificial selection, and he had his mechanism. His notebooks of 1838 show that he had arrived by then at natural selection as the mechanism that causes evolution.

Darwin was as sensitive to Whewell's concept of a consilience of inductions as he was to Herschel's concept of vera causa. After the mechanism of selection is introduced, and after some other matters are attended to— for instance, the introduction of the secondary mechanism of sexual selection, the principle of divergence, some rather unsatisfactory speculations about the causes of heredity— the Origin turns precisely to such a survey of biology, showing the big problems and showing how selection speaks to them. In fact, the bulk of the Origin is devoted to this consilience of inductions.

- Michael Ruse, Introduction, The "Origin" Then and Now: An Interpretive Guide to the "Origin of Species," David N. Reznick, Princeton University Press. (2011)

Comments:
Both Fish and Fowl?

Unlike some Intelligent Design/Creationists who are both fishy and foul.

what's the harm of little idiots?

Both Fish and Fowl?

Yes. My admittedly obscure post titles (needing only to amuse me) are intended to point towards the ironies I find.