On the Tenth Day of Darwin 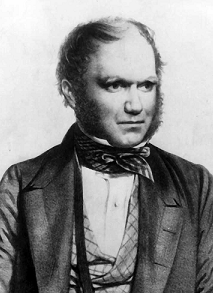 I. Extract from an unpublished Work on Species, by C. DARWIN, Esq., consisting of a portion of a Chapter entitled, "On the Variation of Organic Beings in a state of Nature; on the Natural Means of Selection; on the Comparison of Domestic Races and true Species."

De Candolle, in an eloquent passage, has declared that all nature is at war, one organism with another, or with external nature.

Seeing the contented face of nature, this may at first well be doubted; but reflection will inevitably prove it to be true. The war, however, is not constant, but recurrent in a slight degree at short periods, and more severely at occasional more distant periods; and hence its effects are easily overlooked. It is the doctrine of Malthus applied in most cases with tenfold force. As in every climate there are seasons, for each of its inhabitants, of greater and less abundance, so all annually breed; and the moral restraint which in some small degree checks the increase of mankind is entirely lost. Even slow-breeding mankind has doubled in twenty-five years; and if he could increase his food with greater ease, he would double in less time. But for animals without artificial means, the amount of food for each species must, on an average, be constant, whereas the increase of all organisms tends to be geometrical, and in a vast majority of cases at an enormous ratio. Suppose in a certain spot there are eight pairs of birds, and that only four pairs of them annually (including double hatches) rear only four young, and that these go on rearing their young at the same rate, then at the end of seven years (a short life, excluding violent deaths, for any bird) there will be 2048 birds, instead of the original sixteen. As this increase is quite impossible, we must conclude either that birds do not rear nearly half their young, or that the average life of a bird is, from accident, not nearly seven years. Both checks probably concur. The same kind of calculation applied to all plants and animals affords results more or less striking, but in very few instances more striking than in man.

Many practical illustrations of this rapid tendency to increase are on record, among which, during peculiar seasons, are the extraordinary numbers of certain animals; for instance, during the years 1826 to 1828, in La Plata, when from drought some millions of cattle perished, the whole country actually swarmed with mice. Now I think it cannot be doubted that during the breeding-season all the mice (with the exception of a few males or females in excess) ordinarily pair, and therefore that this astounding increase during three years must be attributed to a greater number than usual surviving the first year, and then breeding, and so on till the third year, when their numbers were brought down to their usual limits on the return of wet weather. Where man has introduced plants and animals into a new and favourable country, there are many accounts in how surprisingly few years the whole country has become stocked with them. This increase would necessarily stop as soon as the country was fully stocked; and yet we have every reason to believe, from what is known of wild animals, that all would pair in the spring. In the majority of cases it is most difficult to imagine where the checks fall—though generally, no doubt, on the seeds, eggs, and young; but when we remember how impossible, even in mankind (so much better known than any other animal), it is to infer from repeated casual observations what the average duration of life is, or to discover the different percentage of deaths to births in different countries, we ought to feel no surprise at our being unable to discover where the check falls in any animal or plant. It should always be remembered, that in most cases the checks are recurrent yearly in a small, regular degree, and in an extreme degree during unusually cold, hot, dry, or wet years, according to the constitution of the being in question. Lighten any check in the least degree, and the geometrical powers of increase in every organism will almost instantly increase the average number of the favoured species. Nature may be compared to a surface on which rest ten thousand sharp wedges touching each other and driven inwards by incessant blows. Fully to realize these views much reflection is requisite. Malthus on man should be studied; and all such cases as those of the mice in La Plata, of the cattle and horses when first turned out in South America, of the birds by our calculation, &c., should be well considered. Reflect on the enormous multiplying power inherent and annually in action in all animals; reflect on the countless seeds scattered by a hundred ingenious contrivances, year after year, over the whole face of the land; and yet we have every reason to suppose that the average percentage of each of the inhabitants of a country usually remains constant. Finally, let it be borne in mind that this average number of individuals (the external conditions remaining the same) in each country is kept up by recurrent struggles against other species or against external nature (as on the borders of the Arctic regions, where the cold checks life), and that ordinarily each individual of every species holds its place, either by its own struggle and capacity of acquiring nourishment in some period of its life, from the egg upwards; or by the struggle of its parents (in short-lived organisms, when the main check occurs at longer intervals) with other individuals of the same or different species.

But let the external conditions of a country alter. If in a small degree, the relative proportions of the inhabitants will in most cases simply be slightly changed; but let the number of inhabitants be small, as on an island, and free access to it from other countries be circumscribed, and let the change of conditions continue progressing (forming new stations), in such a case the original inhabitants must cease to be as perfectly adapted to the changed conditions as they were originally. It has been shown in a former part of this work, that such changes of external conditions would, from their acting on the reproductive system, probably cause the organization of those beings which were most affected to become, as under domestication, plastic. Now, can it be doubted, from the struggle each individual has to obtain subsistence, that any minute variation in structure, habits, or instincts, adapting that individual better to the new conditions, would tell upon its vigour and health? In the struggle it would have a better chance of surviving; and those of its offspring which inherited the variation, be it ever so slight, would also have a better chance. Yearly more are bred than can survive; the smallest grain in the balance, in the long run, must tell on which death shall fall, and which shall survive. Let this work of selection on the one hand, and death on the other, go on for a thousand generations, who will pretend to affirm that it would produce no effect, when we remember what, in a few years, Bakewell effected in cattle, and Western in sheep, by this identical principle of selection?

To give an imaginary example from changes in progress on an island:—let the organization of a canine animal which preyed chiefly on rabbits, but sometimes on hares, become slightly plastic; let these same changes cause the number of rabbits very slowly to decrease, and the number of hares to increase; the effect of this would be that the fox or dog would be driven to try to catch more hares: his organization, however, being slightly plastic, those individuals with the lightest forms, longest limbs, and best eyesight, let the difference be ever so small, would be slightly favoured, and would tend to live longer, and to survive during that time of the year when food was scarcest; they would also rear more young, which would tend to inherit these slight peculiarities. The less fleet ones would be rigidly destroyed. I can see no more reason to doubt that these causes in a thousand generations would produce a marked effect, and adapt the form of the fox or dog to the catching of hares instead of rabbits, than that greyhounds can be improved by selection and careful breeding. So would it be with plants under similar circumstances. If the number of individuals of a species with plumed seeds could be increased by greater powers of dissemination within its own area (that is, if the check to increase fell chiefly on the seeds), those seeds which were provided with ever so little more down, would in the long run be most disseminated; hence a greater number of seeds thus formed would germinate, and would tend to produce plants inheriting the slightly better-adapted down.

Besides this natural means of selection, by which those individuals are preserved, whether in their egg, or larval, or mature state, which are best adapted to the place they fill in nature, there is a second agency at work in most unisexual animals, tending to produce the same effect, namely, the struggle of the males for the females. These struggles are generally decided by the law of battle, but in the case of birds, apparently, by the charms of their song, by their beauty or their power of courtship, as in the dancing rock-thrush of Guiana. The most vigorous and healthy males, implying perfect adaptation, must generally gain the victory in their contests. This kind of selection,1 however, is less rigorous than the other; it does not require the death of the less successful, but gives to them fewer descendants. The struggle falls, moreover, at a time of year when food is generally abundant, and perhaps the effect chiefly produced would be the modification of the secondary sexual characters, which are not related to the power of obtaining food, or to defence from enemies, but to fighting with or rivalling other males. The result of this struggle amongst the males may be compared in some respects to that produced by those agriculturists who pay less attention to the careful selection of all their young animals, and more to the occasional use of a choice mate.
Link - Posted by John Pieret @ 12:15 AM