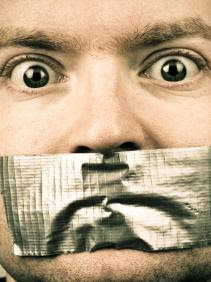 Someday Christians are going to be gagged!


As long as there are still Christians who actually follow Christ and uphold his word, a vast amount of people around the world — never mind Islam — will never ever see gay marriage as anything other than a legal encroachment of God's intent.

So those Christians must be silenced. ...

Any Christian who refuses to recognize that man wants to upend God's order will have to be driven from the national conversation. They will be labeled bigots and ultimately criminals.

The funny thing is, at the comments section on Erickson's post, a commenter nymed "joec" was banned rather quickly for taking a libertarian sentiment that government should get out of the marriage business and for expressing skepticism of the claim that there is something that can be called "natural marriage."

And the excuse was joec's "stupidity."

What was that about using labels to silence people?

There's a whole lot more stupidity both in Erickson's piece and the comments, not least the insistence that God is against gay marriage and "that this country was undoubtedly founded on Judeo-Christian values," which pretty well demonstrates that laws against gay marriage are sectarian, not secular, in purpose and, therefore, unconstitutional.

What Erickson and his cohorts at RedState are afraid of is that they will no longer be able to demonize and discriminate against others without being criticized for it.