Gish Gallops Off This Mortal Coil 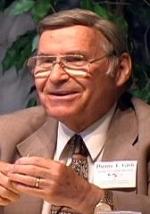 Duane T. Gish, the young-earth creationist who most demonstrated the futility of oral "debates" between scientists and YECs, has died. Developer of the "Gish Gallop," where numerous misrepresentations were floated in sound bites that could never be countered in the time allotted, he mastered the false debate where nothing substantive was discussed and the only point was to reinforce the faithful's preexisting beliefs.

With malice toward none and with charity for all, he still will not be missed in the halls of education.

Comments:
Unfortunately, the Gish Gallop will live on.