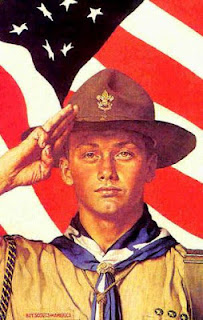 Here's another data point in just how thoroughly the Righteous Right has lost the cultural war to impose its homophobia on the rest of America:


The Boy Scouts of America threw open its ranks Thursday to gay Scouts but not gay Scout leaders — a fiercely contested compromise that some warned could fracture the organization and lead to mass defections of members and donors.

Of the roughly 1,400 voting members of the BSA's National Council who cast ballots, 61 percent supported the proposal drafted by the governing Executive Committee.

Of course, this measure did not go nearly far enough. Openly gay scouts will be, for as long as this lasts, forced out of scouting when they turn 18. Still, baby steps ...

Naturally, the Righteous Right is threatening to pick up their marbles and go home because they lost. Since many scout troops are sponsored by church groups, that could be harmful to the scouts in the short run. But, then again, I wouldn't be surprised to see local governments, enlightened corporations and secular groups picking up at least some of the slack. And the Church of Jesus Christ of Latter-day Saints, the largest sponsor of scout groups, has signaled that it's okay with the change.

As Ted Olson, hardly a flaming liberal, said, in a slightly different context: