They Just Can't Get the Hang of It 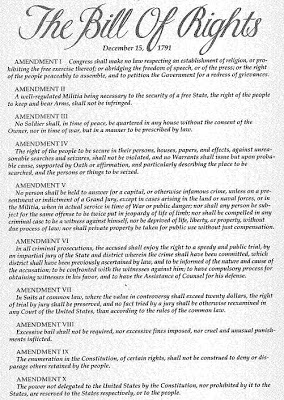 It's Giles County all over again.

A brave young man, Gage Pulliam, contacted the Freedom From Religion Foundation which, in turn, wrote to the school district demanding the removal of the clearly unconstitutional plaques.

The reaction was predictable:


[H]undreds of students have decided to stand up and defend the plaques by launching petitions and raising awareness on social networking sites. And lots of folks around town are wondering why a Wisconsin-based organization is concerned about the affairs of Muldrow, Okla.

Ya see, this Constitution thingie applies everywhere in the US and taking away other peoples' rights anywhere is a concern of every citizen! As to standing up and 'defending' the plaques, I suggest the students adopt George Wallace standing in the schoolhouse door as their role model. Just because the local majority happens to think it is okay to violate the Constitution doesn't make it right.


"It's Christianity under attack within our own country," said Josh Moore, pastor of the First Baptist Church of Muldrow, Okla. "The irony can't be missed by anyone who's lived in this country or grown up in this country."

Because, of course, not letting Christians impose their beliefs on everyone else is to "attack" it. The irony that can't be missed is that the pastor is so certain that "our" country is coextensive with his particular version of Christianity that it is obvious that everyone has to agree with him.

But, for irony all around, this is the winner:


Parent Denise Armer told KHOG* she supports the students' efforts to save the Ten Commandment plaques.

"If other kids don't want to read the Ten Commandments, then they don't have to," she said. "But that doesn't mean that they have to make everyone else do what they want."

But the government can make students who do not agree, for example, that "You shall not make for yourself a carved image, or any likeness of anything that is in heaven above, or that is in the earth beneath" to sit there under a plaque telling them that they should believe? There is always a simple test for how serious this claim is. Would Ms. Armer be okay with verses from the Qur'an being posted on the walls of the public school for her kids to read or not as they choose?

Even state legislators in Oklahoma realize that the attempt to 'save' the plaques is hopeless:


"A majority of teachers and students didn't agree with the Freedom From Religion Foundation letter, so they contacted myself and Senator Mark Allen. After talking with numerous Christian organizations and constitutional lawyers, it became clear that the superintendent and local school board has no choice but to remove the plaques if they want to avoid a lawsuit," State Rep. John Bennett, R-Sallisaw, said.

In 1980, in Stone v. Graham, the Supreme Court thought it was so obvious that public schools could not post the 10 Commandments that it did not even bother to have briefs and oral arguments. Instead, on a petition for writ of certiorari, it ruled:


The preeminent purpose for posting the Ten Commandments on schoolroom walls is plainly religious in nature. The Ten Commandments are undeniably a sacred text in the Jewish and Christian faiths, and no legislative recitation of a supposed secular purpose can blind us to that fact. The Commandments do not confine themselves to arguably secular matters, such as honoring one's parents, killing or murder, adultery, stealing, false witness, and covetousness. See Exodus 20:12-17; Deuteronomy 5:16-21. Rather, the first part of the Commandments concerns the religious duties of believers: worshipping the Lord God alone, avoiding idolatry, not using the Lord's name in vain, and observing the Sabbath Day. See Exodus 20:1-11; Deuteronomy 5:6-15.

This is not a case in which the Ten Commandments are integrated into the school curriculum, where the Bible may constitutionally be used in an appropriate study of history, civilization, ethics, comparative religion, or the like. Posting of religious texts on the wall serves no such educational function. If the posted copies of the Ten Commandments are to have any effect at all, it will be to induce the schoolchildren to read, meditate upon, perhaps to venerate and obey, the Commandments. However desirable this might be as a matter of private devotion, it is not a permissible state objective under the Establishment Clause.

It does not matter that the posted copies of the Ten Commandments are financed by voluntary private contributions, for the mere posting of the copies under the auspices of the legislature provides the "official support of the State . . . Government" that the Establishment Clause prohibits. Nor is it significant that the Bible verses involved in this case are merely posted on the wall, rather than read aloud, for "it is no defense to urge that the religious practices here may be relatively minor encroachments on the First Amendment." We conclude that Ky.Rev.Stat. § 158.178 (1980) violates the first part of the Lemon v. Kurtzman test, and thus the Establishment Clause of the Constitution.

The petition for a writ of certiorari is granted, and the judgment below is reversed. [Citations omitted]

But the locals still may not get it:


Independent Christian student groups and the members of the Muldrow Ministerial Alliance are protesting the removal of the plaques with a planned show of unity by wearing T-Shirts on Wednesday with the Ten Commandments printed on them.

Students have reportedly been told if they wear them they will be made to turn the shirts inside out or go home and change.

Update: The school board is doing the right thing. The plaques were taken down last week and the board voted to make that permanent.

The board got good advice from its lawyers:


"The Supreme Court has of the United States has already decided this issue and said that you can't post the Ten Commandments on a wall of a public school classroom,"Jerry Richardson, an attorney with Rosenstein, Fist & Reingold, explained. "That's pretty clear-cut."


"I can see that they want to take it down that all religions are shown equally," she said. "They don't want to favor Christianity over Atheism or Agnostics."

Preston said that she recognizes the severity of the school being sued.

"It might be better for them to take them down just so they don't lose a bunch of money that they need to buy books and everything we need," she said.

Despite some nasty comments to the news stories, it seems cooler heads have prevailed.
Link - Posted by John Pieret @ 9:04 AM

Comments:
"KHOG" sounds like the title of a Les Nessman WKRP spinoff.

Can you imagine how Dr. Johnny Fever would pronounce it?

"KHOG" sounds like the title of a Les Nessman WKRP spinoff.

I thought it was where Family Guy was set.