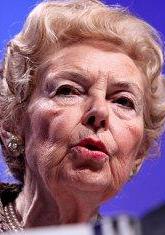 A while back, Phyllis Schlafly counseled the Republican Party to ignore Latinos and, instead, reach out to "the white voters who didn't vote in the last election." As Steve Benen pointed out back then, it is hard to imagine how the Republicans can do any better at winning the white vote or be any whiter.

Heck, Senator Marco Rubio of Florida, the Great Latino Hope of the Republican Party, has had double-digit drops in his net favorability rating among Republicans since he dared to suggest a bipartisan fix to our immigration law. Latino voters will, no doubt, take notice.

Now Schlafly is back "explaining" that Latinos don't "have any Republican inclinations at all" because "they're running an illegitimacy rate that's just about the same as the blacks are" and that they:


... come from a country where they have no experience with limited government. And the types of rights we have in the Bill of Rights, they don't understand that at all, you can't even talk to them about what the Republican principle is.

The Democratic Party should declare Schlafly a National Treasure.
Link - Posted by John Pieret @ 10:05 AM

Comments:
One wonders about earlier waves of immigrants to the USA, and what experiences they had with government.

I assume that "One wonders" is just a marker for a rhetorical question.

The Democratic Party should declare Schlafly a National Treasure.

You mean the kind that should be buried?

You made some decent points there. I looked on the internet for the issue and found most individuals will go along with with your website.