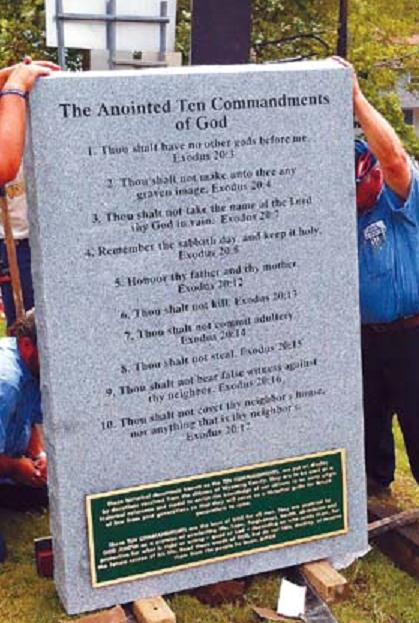 Wyoming County, West Virginia had some vandals sneak up on them.


A few weeks ago, Bill Lewis, a local pastor, and a few others approached the commission about a [Ten Commandments] monument. There was a discussion, but no action was taken by the commission, according to the commissioners.

Then, on June 28, the group was erecting the monument on the [Wyoming County Courthouse] lawn.

The locals have not quite gotten the patter down, however:


"There is no such thing as separation of church and state in our government," [county commissioner] Silas Mullins said.

"That phrase was first used by Thomas Jefferson in a letter, in 1802, to the Danbury Baptist Church," he added. "There is no law against this.

They might want to ask the taxpayers of Pulaski and McCreary counties in Kentucky about that.


"We've had lawyers from other states offering to fight this for us — if it comes to that — at no cost.

What do you want to bet that those lawyers from other states are Mat Staver and his merry band of incompetents from Liberty Counsel who got Pulaski and McCreary counties in such trouble?


"I think it's time that we stopped allowing one person to dictate to the majority," Silas Mullins emphasized. "What about our civil rights?"

He noted that about 70 percent of the residents of Wyoming County are born-again Christians, and the vast majority of the remaining 30 percent do believe in God.

Because, of course, it is your civil right to use government to impose your beliefs on others, as long as you are in the majority. And anyone not in the majority just has to accept their tax money being used to proselytize the majority's religious beliefs. Somehow, I don't think they quite get this whole "Bill of Rights" thingie.

And that doesn't even cover the fact that they are using a version of the Ten Commandments different than the one used by Jews, Catholics and Lutherans.

The Ten Commandments have origins in Judaism and parallel scriptures appear in Islamic texts, he said.

Well, as long as the "big three" agree, who needs to worry about Buddhists, Hindus, Shintoists, Native American spiritualists and all the other varieties of religious beliefs ... not to mention agnostics and atheists.

The ACLU, if it can find someone to be the plaintiff, will soon be on a fishing expedition ... in a very small barrel.
Link - Posted by John Pieret @ 10:42 PM

Comments:
Isn't one test of intelligence supposed to be the ability to learn from past mistakes?

Apparently it doesn't count unless it is your own mistake and not that of others.

Isn't anybody the least bit embarrassed by this? House, wife, slaves, cattle, and other possessions.

Anonymous: maybe someone was embarrassed, since that isn't the version on the tablet.

Anonymous, I am not embarrassed by that at all, since in Hebrew the 'you' in the commandments is the masculine singular form (which goes right along nicely with not coveting one's neighbor's wife). If you, like me, are a non-guy, we have no worries -- the commandments don't apply. We go right under the radar. ;-)

I am not embarrassed by that at all

The people who created the "monument" are the ones who should be embarrassed, given that they give the verse as Exodus 20:17 but misquote it. They don't even bother to put in an ellipsis to show what they left out.

That's funny -- I read your post but didn't look at the graven image, er, monument.

Apparently the Bible should be quoted in plain 17th century English (keep those 'thous' for atmosphere) -- but not TOO plain -- we need to edit out any sticky specifics.

Otherwise you'd be commanding people there is to be NO WORK WHATSOEVER one day out of each week, along with the other crazy stuff, previously noted.